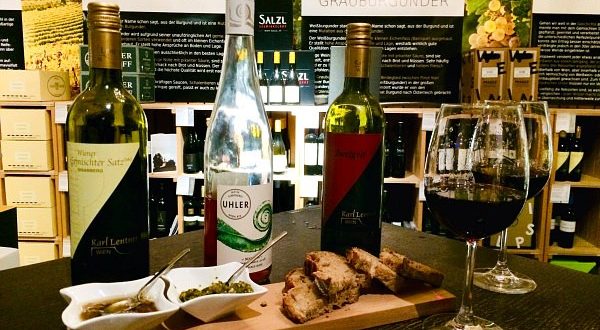 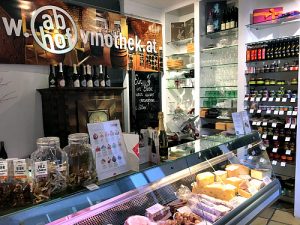 As for guided wine tasting in Vienna local Austrian wine shops often beat vintners. Why? Simply because the latter are either busy cultivating wine, or serving food and drink in their wine taverns. In the city center, a small deli and wine store regularly pours out its knowledge about Viennese and Austrian wines.

On top, you get to know one of the most spectacular central Viennese wine cellars. To give you a flavor I joined a wine tasting session. Here is my story. 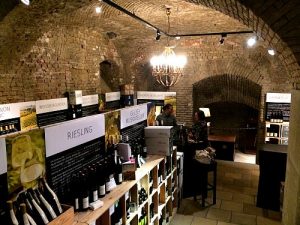 After climbing down a few stairs we found ourselves in a sizeable vaulted brick room. Unlike a plain storage room packed to the ceiling with boxes, this one displayed boxed shelves of neatly labelled wine bottles. Right as you entered, a local map of Austria’s wine growing regions pin pointed the key regions of local viniculture. 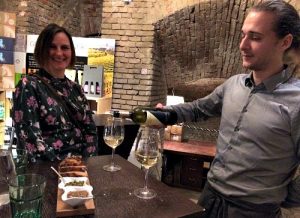 To begin with, most of those wine tastings kick off with a Gemischter Satz, since it’s a unique and very characteristic local type of wine. Our wine guide Cornelius poured out a Gemischter Satz from multiple award winning vintner Karl Lentner from local Bisamberg mountain.

Whereas a cuvée mixes several wines, the Viennese Gemischter Satz combines wines from different types of grapes growing next to each other in the vineyard. In our case, all of the grapes were white, light and fresh and tasted a bit of pear. 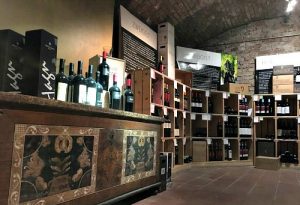 For the second wine tasting Cornelius uncorked a bottle of award-winning Zweigelt Rose ‘Monia’ from the vineyards of local vintner Peter Uhler. Actually, Zweigelt is an Austrian grape variety, crossing St. Laurent and Blaufränkisch. Not just its color reminded us of rhubarb and red currant but its fruity fresh taste, too. Passionate vintner and violinist Peter Uhler cultivates his Zweigelt grapes on the protected Northern slope of lovely Reisenberg hill in Vienna. In the summer he sometimes runs a weekend pop up wine tavern right in the vineyards. 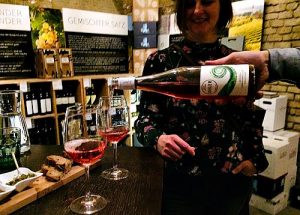 After white and rosé, our third glasses filled with a scarlet red Zweigelt from Karl Lentner’s. Also known as Rotburger, this wine deeply tastes of vanilla, sour cherry and sometimes even walnut. What’s more, Austrians love to drink Zweigelt with their most typical dishes, such as Wiener Schnitzel, gulash and Tafelspitz. As we were about to finish the first part of our wine tasting experience, we finally went for the crispy walnut bread with pesto.

All through the tastings, we talked about Austrian wines with Cornelius and what makes them so special. Since he had graduated from Austria’s best school for viniculture in Klosterneuburg, our conversation turned out to be as deep and exciting as the historic wine cellar. 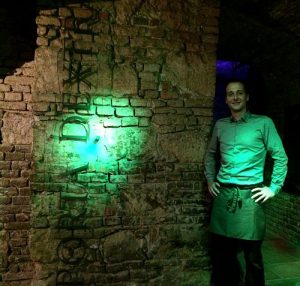 Behind the wine store’s Latin name Porta Dextra lie almost 2,000 years of history. In the city of Vienna’s early days, the Romans set up a legion’s camp on the Danube, and started to cultivate vineyards. Over the centuries, Roman Vienna, aka Vindobona, developed into one of the most important cities of the Roman Empire. Hence, ancient Roman remains hide throughout the city center.

In our case, Cornelius guided us down the quite spacious four-storey cellar for another two floors. There, integrated into the brickwork, were several large stones – reportedly the remains of the Right Gate (Porta Dextra) of Vindobona.

Back up in the main wine cellar its slightly displaced looking column told another story: When the Ottomans finally gave up their Siege of Vienna in 1683, the Viennese molded their cannon balls into the famous Pummerin Bell of St. Stephen’s Cathedral. To transport the gigantically heavy bell to St. Stephen’s, however, the cellars along the transport route had to be fortified. And after the Pummerin finally arrived at its destination, many fortifications like that column in the wine cellar simply stayed.

How To Book A Wine Tasting 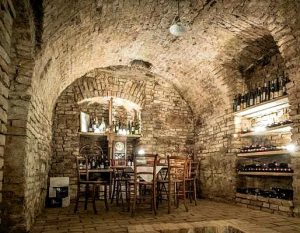 Click here to find out about available space and prices for this wine tasting. Usually, these small group wine tasting experiences take place between Tuesday and Friday. Because they are still an insider tip, you may even end up having your own private wine tasting, like we did!

NOTE: I was invited by the wine tastings organiser to join the tour. All opinions expressed and English language mistakes are explicitly my own.