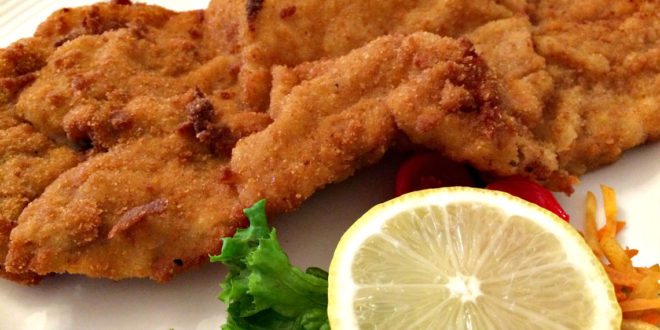 Wiener Schnitzel – How We Do A Wienerschnitzel Recipe

Since the Wiener Schnitzel (or Wienerschnitzel) remains at the epicentre of Viennese cuisine, learn all about it, including the best Schnitzel recipes and local insider tricks for preparing it.

From a culinary point of view, Schnitzel stands for our love for all things breaded and fried: from meat to fish, mushrooms, celeriac, cauliflower, and even cheese.

What Makes A Great Wiener Schnitzel? 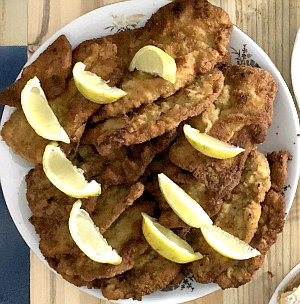 Essentially, Wienerschnitzel is a thinly hammered and breaded veal or pork cutlet. While chicken schnitzel are good, too, the best Wiener Schnitzel are made from tenderloin pork or leg of veal. To prepare the classic Wiener Schnitzel use the veal’s super tender lean topside, alternatively the fricandeau or the thick flank. Since the cutlets should be four to six millimeters thin ask your local butcher to cut them for you.

The other top ingredient are the breadcrumbs: To prepare the perfect schnitzel take old and stale white bread or a baguette and grind it in a food processor. Some people also use a mixture of white and dark breadcrumbs for a stronger flavor.

To ensure your schnitzel is really crispy use a technique called soufflieren:  When frying the cutlets (don’t deep fry though the schnitzels need to swim in the vegetable oil or butter fat) toss the pan in a circular movement to let the oil run across the upper sides. This ensures the coat of breadcrumbs inflates a little.

When you visit Vienna take this shortlist of the best Wiener schnitzel in Vienna restaurants with you.

Like all legendary dishes, the Wienerschnitzel’s history has been controversial. Some say it is a cultural import from the Italian Costoletta a la milanese in the 19th century. Although many historians say this is a myth.

Ultimately, the most convincing theories state that the Schnitzel is a bourgeois invention of 18th century Vienna. At that time, the upper class Austrians already breaded their chickens, dressing up the fact of devouring dead animals. For sure they had plenty of pork fat to fry, and loads of breadcrumbs from the vast amounts of white bread consumed.

If you are a history buff you can find the earliest reference to breaded cutlets in the ‘Kleines Österreichisches Kochbuch’ from 1798, called Gebackene Schnitzeln.

How To Prepare Wiener Schnitzel

When he had clean hands my son shot the following photos during our Vienna cooking class – highly recommended when you visit Vienna! 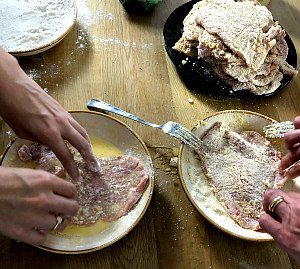 Wiener Schnitzel are usually served with a wedge of lemon on top, and with warm or cold potato salad, and lettuce.

Here are the most popular varieties in Vienna and Eastern Austria.

A popular Austrian variety, the Surschnitzel uses salt pork cutlets in brine instead of normal pork or veal for the Wiener Schnitzel. You can try them at many Lower Austrian and Vienna wineries and taverns.

Some Viennese taverns and restaurants, such as Schnitzelwirt in the 7th district of Neubau serve rolled Schnitzel. These are usually rolled pork cutlets, filled with spinach and cheese.

Though likely of Swiss origin, the Cordon Bleu is hugely popular of Eastern Austria, especially of Vienna. It is prepared like a Wiener Schnitzel, but has a layer of ham and cheese on one side underneath the breadcrumbs.

Get more ideas on Austrian food