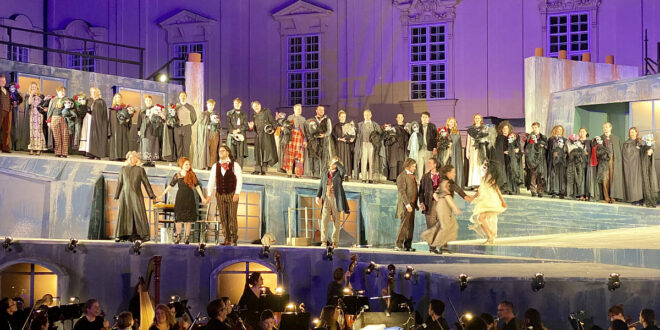 Vienna Summer Opera. When Viennese opera houses close for the season an open air opera close by lets in an unexpected breeze of charm. At Klosterneuburg, a few July and August evenings transform the 900-year old abbey’s Imperial Courtyard into a musical theatre stage. In the past 25 years, its precious baroque façades have echoed tunes of Donizetti, Mozart, R. Strauss, Verdi and others.

During my latest visit Oper Klosterneuburg revived Puccini’s La Bohème. A look at the programme promised an impressive set of sopranos, tenors and baritones along with a fantastic orchestra. Hence, I didn’t need to think twice to attend.

What To Expect At Oper Klosterneuburg

Vienna Summer Opera. At Vienna’s North Eastern fringe the majestic abbey, along with its magnificent Imperial state rooms, is towering above the Danube.

Each year, Klosterneuburg’s municipality stages its summer opera performances on the grounds of the glorious baroque landmark.

When I arrived during an August sunset the abbey’s exterior courtyard was bathing in warm sunlight: Turned into an elegant al fresco reception it was buzzing with smartly dressed music aficionados and the sounds of a rehearsing orchestra.

In the inner courtyard, a multi-level stage set conjured La Bohème’s 19th century romantic Parisian atmosphere like in any fine opera house. On top of that, the producers used the nightly setting for a few magic extras: like the mystical spirit’s shadow dancing on the abbey’s baroque façade; or two black horses pulling a carriage from where Musetta and her elderly lover Alcindoro jumped out and onto the stage. (According to the first violinist the production team mastered a few challenges getting the horses used to an orchestra playing next to them.)

Clearly, it’s easy to succumb to the enchantment of an outdoor theater in an inspiring historical landmark on a warm summer night. However, don’t assume it’s all about the setting: opera singers like Lithuanian Kamile Bonté poured their amazing vocal power into characters such as suffering Parisian embroiderer Mimí. In the orchestral pit, maestro Christoph Campestrini ignited the Beethoven Philharmonic Orchestra to masterfully support big emotions on stage.

Vienna Summer Opera. In 2023, Verdi’s grand opera Don Carlo will pay tribute to Klosterneuburg Abbey’s history. In the 18th century, Emperor Charles VI wanted to turn the Stift into an Austrian Escorial based on the historical residence and monastery in Spain.

In case of bad weather the performances will take place in the nearby Babenberg Hall, at four minutes walk from the abbey.

What Else To Do At Klosterneuburg Abbey

To explore the abbey’s cultural treasures and learn about Austria’s early history tour Stift Klosterneuburg, home of the Order of the Augustinian Canons, before your opera visit.

On top, the abbey’s ancient wine cellars have their own story to tell about Austria’s oldest wine estate. As many as several hundreds of barrels of home made fine wine rest below ground. Find out more in Vienna Art And Wine Tour.

Always Wanted 121 Insight From A Conductor?

Throughout the year, Oper Klosterneuburg conductor Christoph Campestrini shares decades of professional insight and his passion for classical music.

How To Get There

Travelling to the abbey by bus or train

Travelling to the abbey by car

Via road B14 in approx. 10 minutes from the boundaries of Vienna. On the abbey’s grounds you find ample parking space in the underground parking garage.

Note: I was invited by the event organisers. All opinions expressed are my own.