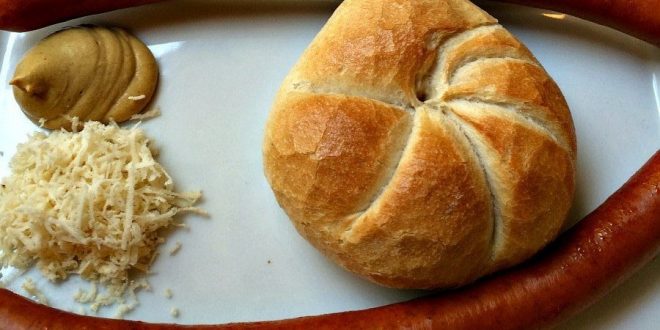 For a simple snack there is much confusion about the Vienna sausage. On top, Vienna sausage refers to a different sausage in Austria’s capital, while there are a dozen excellent Vienna sausage varieties you can eat at local sausage stands. Therefore, if you want to get behind the Viennese sausage culture and beyond what it says on the can, get real insight in this post from a Wiener (Viennese).

Why Is It Called Vienna Sausage?

While the Wiener originates from the German city of Frankfurt, it is called Vienna sausage outside of Austria and Switzerland – why? In fact, there is a fine difference: A Vienna sausage includes both pork and beef, while the original Frankfurter sausage just contains pork, apart from salt and spices such as mustard.

When Frankfurt butcher Johann Georg Lahner moved to Austria’s capital Vienna in 1805 he was able to refine his original pork sausage recipe with some beef. Consequently, he sold his sausages as a new type of Frankfurter Wuerstchen. Later on, they were sometimes called Wiener Wuerstchen (Vienna sausages), though in Austria and Switzerland the name Frankfurter dominated.

When you travel to Austria and ask for a Wiener you will likely get a much thicker slicing sausage, rather than a scalding sausage. This is what we call Wiener.

What Are Vienna Sausages Made Of?

To make a Vienna sausage grind some pork and beef with water, white pepper, nutmeg, garlic, pickling salt and mustard into a silky texture. Some sausages also include bacon and some potato starch. If you make sausage purely from beef, you’ll have to call them Vienna beef sausages, or Vienna beef hotdogs. Originally, the sausage case used sheep intestines but you can use any type of edible casing. Subsequently, lightly smoke your Vienna sausage to get the characteristical taste.

Comparing the taste of Vienna sausages, or Frankfurters, in Vienna to the North American weenies, they taste very similar. However, if you have local sausages at a Vienna sausage stand, do try the many other varieties of sausages you won’t get anywhere else. Below you will find a list of all major local specialities.

Are there really pig ears and other low quality animal parts in Vienna sausages? As for the Austrian Ministry of Food and Agriculture, Frankfurters need to include first quality pork and beef, and bacon. 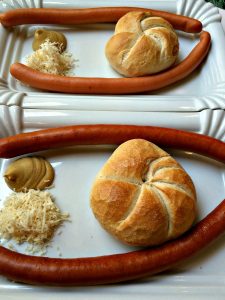 What you will know as Vienna sausage is called Frankfurter here in Vienna, a mix of pork, beef and bacon, served as a pair with a roll or a slice of dark bread and mustard. Don’t translate it to Wiener Wurst, as there is a type of cold meat here called Wiener. However, if you visit Germany and have Frankfurter Würstchen, you will get a slightly shorter but thicker version with just pork. This is the Georg Lahner’s original invention and the name Frankfurter Würstchen is protected as a designation of origin.

When buying a hot dog in Vienna you will get a Frankfurter in the familiar long bread roll, you know it.

Although not the typical Viennese street food, you may find the Sacher sausages at a few selected sausage stands. These sausages were invented at Hotel Sacher and are widely available in Viennese coffeehouses. Typically, they are 25 to 30 cm long, and taste much the same as the classical Frankfurter; 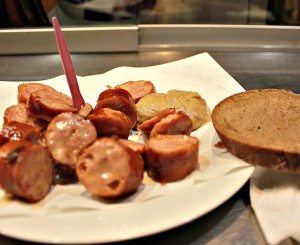 Probably the most popular sausage at Viennese sausage stands is the Käsekrainer, a smoked scalded pork sausage with bits of melting Emmentaler cheese inside.

The word Krainer refers to a former Imperial Crownland of the Habsburg Empire, which is now part of Slovenia. In Viennese dialect, the sausage is not very appetizingly referred to as ‘Eitrige’ (purulent).

Like the Krainer sausage, the Debreziner originates from the former Imperial Crownlands. Its name comes from the Hungarian town of Debrecen. Most characteristically, this red shredded pork and beef sausage intensely tastes of smoked red pepper. In Hungary, the Debreziner are usually hotter than the milder Austrian version.

If you prefer crispy sausages exuding that aromatic savoury smell go for the Bratwurst, a slim long pork and veal sausage that can also include bacon. At the sausage stands the Bratwurst sizzles on hot frying platforms. Like the Debreziner and Käsekrainer, the Bratwurst has a rougher texture and uses either sheep or pork intestines as a casing. As for spices you will mostly taste marjoram, white or black pepper and at times nutmeg.

Named after the forestry region of Lower Austria, the Waldviertler or Rauchwurst (smoked sausage) is a dark and slightly smoked sausage. Essentially, the Waldviertler consists of shredded beef, pork knuckles, pig’s head, bacon and ground and spiced pork and beef. The hearty flavor comes from a mix of garlic, pepper, ground coriander seeds, cumin, marjoram, red pepper and piment.

Also called Klobasse, the Burenwurst is a thicker aromatic boiled sausage from a mix of shredded pork and beef, bacon, potato starch, herbs and spices. While the name ‘Bure’ does not refer to the boers and the boer war the sausage became popular during the boer wars between 1899 and 1902. Because of its modest ingredients the Burenwurst probably derived its name from the local farmers (Buren, Bauern). When ordering Burenwurst at the sausage stand, some Viennese refer to it as ‘Haasse’ in the local dialect. 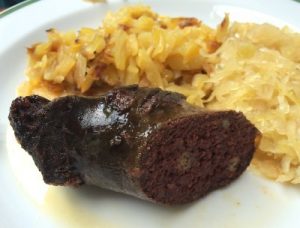 Although only a few sausage stands sell them, Blutwurst, or Blunzn in Viennese dialect, has been a popular local sausage since antique Roman times. Essentially, a blood sausage includes pork, pig’s head, cubed bacon and pre-cooked rinds of bacon, apart from blood and occasional intestines. If you have the fried blood sausage variety, expect some extra white bread, cooked cereals, onions and spices in your sausage.

Although most popular in Salzburg, you may find the Bosna also at some Viennese sausage stands. Image two spicy thin pork sausages in a white bread bun, served with chopped onions mustard, parsley, and curry.

While not a Viennese sausage, a Leberkäs-Semmel is another traditional staple at local sausage stands, and worth a try. Consisting of a slice of aromatic meat loaf this snack comes in a typical Austrian bread roll. In fact, the Leberkäse or Fleischkäse originates from Bavaria. Its fine silky texture is similar to a Vienna sausage, and consists of ground pork and beef, bacon and potato starch, in addition to garlic, pepper, nutmeg blossom, onion, sweet red pepper and piment. Scalded in a rectangular tin, the meat loaf is then cut into thick slices. Add sweet or spicy mustard, ketchup or horse radish, and pickled peppers and gherkins. For a wider variety of meat loaves, head for snack bar Leberkas Pepi.