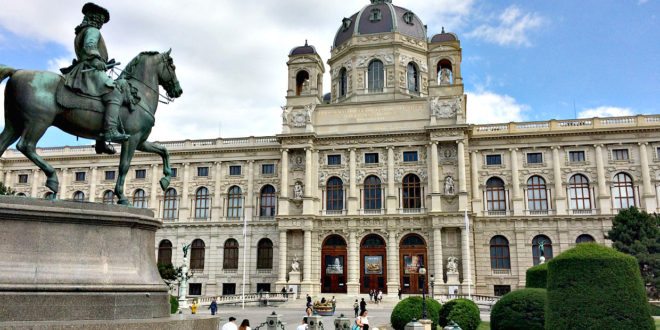 Vienna Pictures Landmarks. These are the top landmarks in Vienna you should know. Use the notes and links below to learn more about them.

A few further notes and links to the key landmarks shown in the gallery:

The Stephansdom (St. Stephen’s Cathedral), Vienna’s gothic landmark church with its beautiful tiled roof, including the coats of arms of Austria and Vienna, seen from the Sky Bar and restaurant at Steffl department store.

The Museum of Fine Arts belongs to the vast building complex of Hofburg (Imperial Palace). The Kunsthistorisches Museum houses some of Europe’s top classical art treasures, and the Habsburg Emperors’ Cabinet of Curiosities. Learn more what to see there.

To the left of the Museum of Fine Arts you will find Museumsquartier. The former Imperial Stables have been converted into a large museum complex with cafes and outdoor event space. Read what best to do there.

The Art Nouveau centre piece of Vienna is the Secession, headquarters of the secessionist movement of revolutionary Art Nouveau artists like Gustav Klimt, Josef Hofmann, and Otto Wagner. If you are a Klimt fan, don’t miss his Beethovenfries in the basement.

The Majolikahaus by Otto Wagner is wallpapered throughout with glased maiolica tiles in red poppy flower ornaments (designed by one of his pupils). It is one of Wagner’s three houses on Wienzeile 38, right next to Naschmarkt.

Otto Wagner built two station buildings for the city railway in the early 20th century. The Art Nouveau buildings represent some of the best landmarks of Wiener Jugendstil. The building in the photograph houses a documentation of the Wagner’s groundbreaking work and life (open April to end of October).

The Loos House is another rebel building of Viennese architecture: Local architect Adolf Loos almost had to scrap his concept of building this house in the early 20th century. It was perceived as too modern and frugal. Thanks to his addition of flowerboxes this great piece of Vienna Modernism (Wiener Moderne) went ahead. The materials used are all but frugal: Marble for the exterior; mahogany, brass lamps and mirrors for the interior. You can visit the ground floor that houses a retail bank.

Vienna City Hall (Wiener Rathaus) is the seat of the local government and administration of the region of Vienna. It was built in the 19th century using historistic styles as a typical Ringstrasse landmark. There are numerous popular events at Rathaus and on the main square throughout the year.

The Austrian Parliament on Ringstrasse houses the National Council and the Federal Council. It has been active since the days of Emperor Francis Joseph when the Imperial Assembly (Reichsrat) took up its work in 1867. You can visit the Parliament during one of several public guided tours each workday.

Karlskirche (Church of St. Charles Borromeo) by night brings out the beauty of its architecture. The church is one of the finest landmarks of the baroque period in Vienna. You should see the frescoes inside the dome. (You can go up by elevator to the inside of the dome to watch them more closely.) Or visit some of the seasonal fairs on the square in front of the church.

Landmarks like the Giant Ferris Wheel in Vienna’s Prater still symbolise the city for many travellers. The 10 minute ride is nice though are other locations offering a more breathtaking view of the city. What I find more spectacular are the five luxury cabins on the Giant Ferris Wheel which you can hire for special occasions – to propose, dine and celebrate.

Vienna still has six anti-aircraft gun blockhouse towers (FLAK Towers) from World War II, which also served as bunkers. They are grouped two by two and form a triangle around St. Stephen’s Cathedral. The only FLAK Tower that can be visited from the inside houses Vienna’s acquarium ‘Haus des Meeres‘. The tower also boasts impressive rooftop views of Vienna.

Find more landmarks in the slideshow on Vienna Pictures Palaces.

NOTE: You are free to use material from ‘Vienna Pictures Landmarks and Buildings’ if you credit www.vienna-unwrapped.com. Thank You!