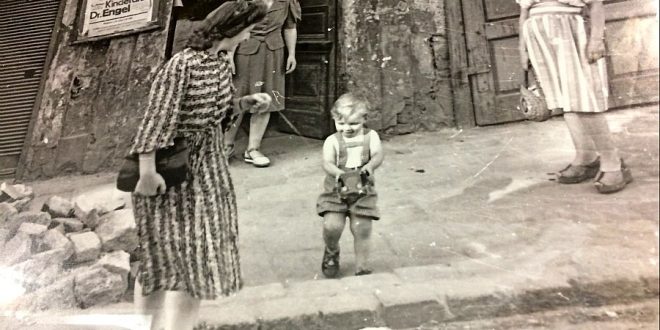 Austria’s Second Republic. Vienna history books are full of accounts on what happened after World War II. This page provides you with a personal snapshot from a native’s point of view. Since my Viennese mother was five years old when the War ended she shared some of he earliest memories with me. 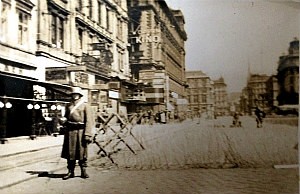 Austria’s Second Republic. Just as the Third Reich finally collapsed under the Allied Forces the Republic of Austria was proclaimed in April 1945. France, Great Britain, the Soviet Union and the United States were adamant for Austria to be independent again. Subsequently, they allowed for the Social Democrats, the Conservatives and the Communists to form a provisional government. In November 1945, the first parliamentary elections since 1930 re-confirmed these three parties to govern Austria under the leadership of Leopold Figl from the Conservative Party. Dr. Karl Renner became the first president of Austria’s Second Republic. However, for another 10 years the Austrian government would be effectively ruled by the Allied Forces. This photo was taken by my late Viennese grandfather, showing a member of the Allied Forces guarding entrance to the city center close to the State Opera. 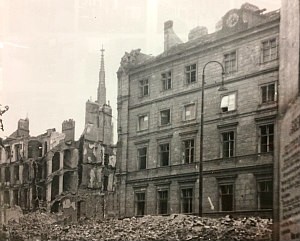 Austria’s Second Republic. Following the devastating effects of the seven-year long war in Austria, Vienna’s city council was restored and the Wiederaufbau (Reconstruction) started. The war had fully or partially destroyed some 87,000 apartments. Just after the war in the summer of 1945, tens of thousands of Viennese were homeless. Millions of cubic metres of rubble covered streets and pavements. Many public buildings, such as Vienna’s City Hall, took decades to be fully restored.

In March 1948 Austria joined the list of countries to receive support under the Marshal Plan, including loans and food supplies. 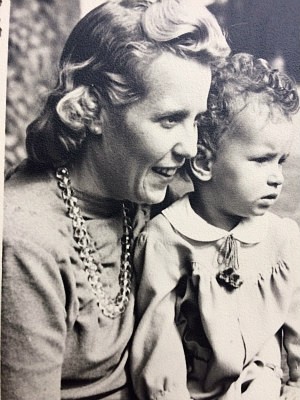 In 1945, my mother was five years old. The photo on the right shows her with my grandmother in 1944. Among her earliest childhood memories are the many bombs on Wien. My grandparents would rush her out of bed to head to the basement of their block of flats, the howling sirens, and the silence afterwards. There was little to eat. The Russian Allies had organised regular deliveries of dried peas, and everything was subsequently made out of them, from soup to sweets to even coffee. There were also no clothes or shoes. My grandmother used to rip small pullovers and re-knit them with just a little more wool. When my mother’s shoes got too small, my grandmother would simply cut the front part open.

Since food was scarce those citizens who had a garden were better off, like my mother’s aunt Caroline (‘Lintschi’). A few years after the war ended she had secured a tiny allotment in the 12th district where she would plant fruit and vegetables.

Austria’s Second Republic. My grandmother was one of the many Trümmerfrauen (Debris Women) of Vienna. By way of law these women, aged between 15 and 50 years, had been obliged to help remove the massive debris in town. Many of them were widows with small children.

In our family photo albums there is not one photograph of bombed Vienna: during that time many families chose to take ‘happy’ photographs of their loved ones that would cheer them up.

Austria’s Second Republic. In the decade after the end of World War two, the Vienna Council implemented a series of social housing projects. Around a fifth of all local houses had been destroyed. Many Vienna landmarks such as the Stephansdom (St. Stephen’s Cathedral) and the Vienna State Opera had been badly damaged. (Airfighters had bombarded the Vienna State Opera because they thought it was a train station.)

After 1945, my mother would spend a few weeks every year in a children’s holiday camp in the Vienna Woods, to gain weight and get some fresh air. These holiday camps had been organised by the City Council, as part of the Marshall Plan. Meanwhile, a friend of my grandmother would organise holiday transports of Viennese children to neutral countries like Denmark or Portugal. 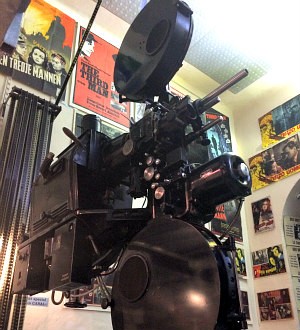 Austria’s Second Republic. Unlike any other film, ‘The Third Man’ features the tough years of the Reconstruction of Vienna, along with spy wars, the Black Market and East-West politics. The 1949 movie is based on a novel and screenplay by Graham Greene, starring Joseph Cotton, Orson Welles and Trevor Howard. But not just the movie provides an insight into post war Vienna: When you are in Wien, do visit The Third Man Museum (Dritter Mann Museum) which displays excellent original documents about the years of the Allied occupation from 1945 to 1955.

There is also a brilliant guided walk through Vienna, the Third Man Tour which leads you to some of the original scenes, such as Cafe Mozart, Josephsplatz and Mölkerbastei.

Other posts that may be of interest