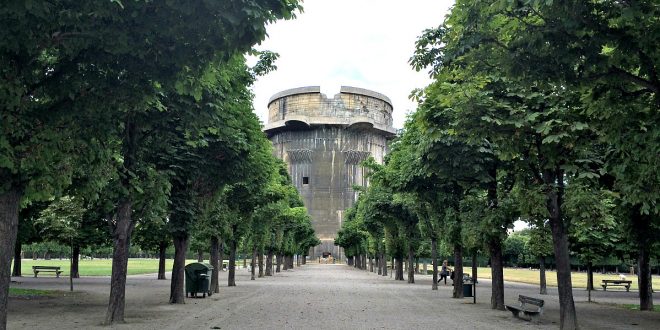 With six Vienna flak towers darkening the cityscape the monstrous concrete blocks still weigh heavily on Vienna’s past. While precious palaces and fine museums fill cultural space, the up to 47 meter high concrete cylinders fill historical space much needed for understanding Wien’s past.

As a matter of fact, many local historians believe the Viennese government doesn’t adequately deal with the historical importance of the flak towers. Whereas five of the six blocks bear silent witness to World War II, only one is open to the public. Find out how to visit that flak tower and where to find the others.

What Is A Flak Tower?

The word Flak is short for Flugabwehrkanone (air defense gun). Usually, each pair of towers was built in pairs about 160 meters apart, a lead turret (l-turret) and a gun turret (g-turret). Whereas the lead turret hosted the radar devices, the gun turret held four large anti aircraft guns each. The upper platforms a few meters underneath the rooftop were used to position guns against low-flying aircraft. To protect civilians from air raids, each of these bunkers was able to host up to 10,000 people. Actually, the gigantic bunkers should not least suggest safety to a population increasingly shaken by war.

When Were The Flak Towers in Vienna Built?

Between 1942 and 1945, hundreds of forced and immigrant labourers built the six flak towers in Vienna. In order to protect the city center the three pairs form a triangle around St. Stephen’s Cathedral (Stephansdom) and are located in the second, third and sixth districts. 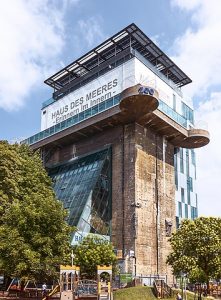 Since the late 1950s Vienna has been housing the aquarium Haus des Meeres behind the former lead turret’s 2 to 2.5 meter thick walls. On its top floor, rooftop café Ocean Sky offers beautiful vistas across Vienna. In the warmer months, the Austrian Alpine Association operates a climbing wall for climbers to ascend up to 30 meters. Some historians have criticized the leisurely use of a monument against war and forced labour.

Because of massive restructurings the tower is not landmarked any more. In 2019 and 2020, Haus Des Meeres added a modern glass annex to the front, whereas another wall received vertical greenery. However, the aquarium still houses a few historic rooms and a permanent exhibition.  During 20-min short guided tours on two levels you can learn about the story of the Vienna flak towers, see exhibits and a short film, and experience the air raid shelter for residents.

At the Stift barracks (Stiftskaserne, aka Stiftgasse- AG General Spannocchi), the Austrian Army uses the gun turret building which belongs to the Republic of Austria. In case of a disastrous crisis, the top leaders of the Austrian government are supposed to retreat to the tower. In March 2020, for example, the Austrian Broadcasting Station ORF had planned to use the tower’s emergency broadcast station in case the Corona virus had incapacitated operations from its local broadcasting station in the 13th district. 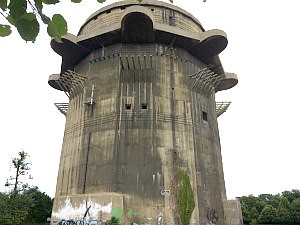 Because the Vienna flak tower pair at Augarten was the last one built in the Third Reich it is also the most modern. With 13 levels, the gun turret represents the highest flak tower in Vienna. Unlike the towers at Haus des Meeres, the Stift barracks and in Arenbergpark, the two towers at Augarten are not used. Whereas the lead turret was never finished the gun turret (photo) was heavily damaged after the war. Since then, the towers have been slowly deteriorating. Although access is strictly forbidden, every now and then local police heftily fines individuals for trespassing.

When you visit baroque Augarten and its porcelain manufactory in Leopoldstadt, take some time to observe the towers more closely from Obere Lindenallee in the park. 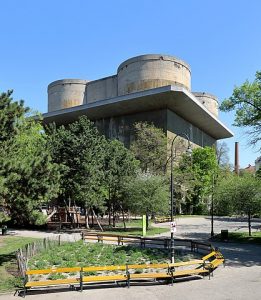 Built in December 1942, the flak towers in Arenbergpark in the third district were the first to be built. At a height of 42 meters they don’t have any windows. The gun turret offered bunker rooms on three levels for the residents, and a hospital. Two elevators transported guns and ammunition from the basement to the rooftop. In 2019, anonymous activists re-wrote the famous lettering „Smashed to Pieces (in the still of the night)“ by US artist Lawrence Weiner at the outer wall of the tower. Before, the word sculpture against fascism had decorated the wall of the flak tower of Haus des Meeres. Because of extensive reconstruction work the lettering had been removed.

Today, the Museum of Applied Arts / Contemporary Art uses the turret as an art depot.

Like the gun turret, the lead turret in Arenbergpark has a similar shape and construction and hosted two fire control meters on its upper platform. Today, you can still see original graffiti probably done by forced laborers. Although this tower may be the most likely to be eventually opened up to the public, the Viennese authorities are unlikely to act quickly, given the high costs for renovation and security.

While there is no dedicated Vienna flak tower tour a local private guide can take you around the tower sites. To visit all sites using public transport, factor in some 2.5 to 3 hours for this tour. Get in touch if you need assistance.

Today we had a terrific tour through Vienna, facilitated by Vienna Unwrapped (…). The two of us went on a 3-hour discovery tour of Viennese Flak Towers with a tour guide, and each minute was exciting!” Sabine H., January 2022 (translated from German)

In this map you can see the three pairs of flak towers forming a triangle around the Innere Stadt (Vienna city center). To zoom in, just click on the map.