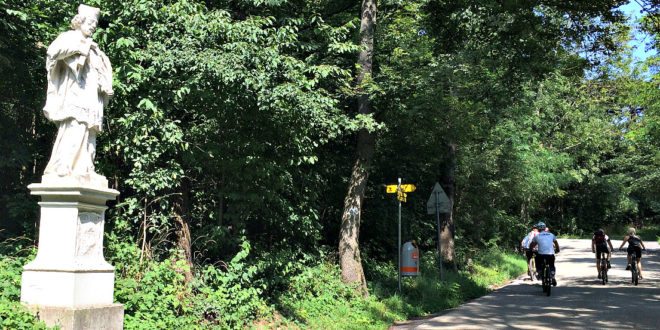 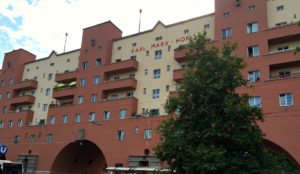 Vienna bicycle tour. Our small group of three met where town meets green, where plain meets hill, and where capitalist meets marxist. Heiligenstadt in Vienna’s North captures all this. Karl-Marx-Hof, a reminiscent of Vienna’s red past, was eerie. Stretching along more than one kilometre (0.7 miles) it is the world’s largest residential building. The plan was to explore Vienna’s hilly vineyards, ascend its two ‘house mountains’, visit a winery and then cycle back. 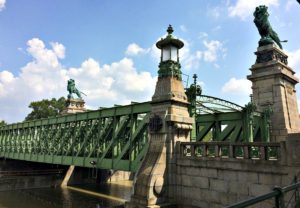 Our tiny group, headed by tour guide Hugo, went for the Danube Canal cycle path. The first few hundred metres delivered a peculiar scenery of fly-over road above our heads and idyllic canal romance on our right. When two lions, a weir and administrative building showed up I tested my brakes: Only few Vienna travellers get lucky enough to see Schemerl Bridge, another gem of Art Nouveau genius Otto Wagner. 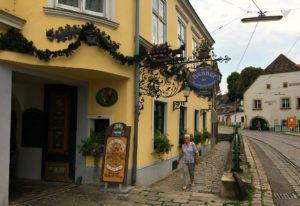 Vienna bicycle tour. Shortly afterwards we hit Nussdorf, Ludwig van Beethoven’s legendary village, and paradise for wine lovers and fine suburban life style. A cobble stoned path lined up traditional winery houses before changing into a quiet residential street and then hiking path along Schreiber stream. I had never tried an electric bike before but this was the moment I embraced it. Whenever the hill started to bite my thighs a gentle boost pushed me forwards. 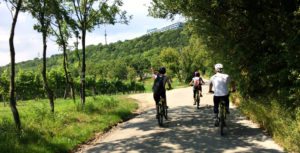 Eventually we climbed up Kahlenberg hill through vineyards and small patches of wood. Biking up those 400 metres altitude is an absolute no no for untrained cyclists but a triumph for those with e-bikes. You still need to work out but you choose the extent to which you want to do it. Sometimes our group

members went at different speeds, with regular stops after a few hundred metres. 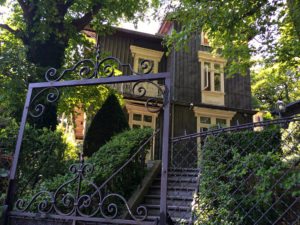 Vienna bicycle tour. The higher you ascend Kahlenberg the more evident the ‘Vienna Woods style‘ becomes, such as this wooden villa with the typical black cast iron fence on the way. You won’t find this piece of Vienna anywhere else but in Wienerwald. The other unique things you will find on the way are religious wayside shrines (see feature photo) and crosses in stone or wood. They remind passers by of praying on the way or of previous local road accidents.

The top of Kahlenberg stored tales of the Turkish Siege of Vienna 1683 and one of the best panoramic views of the city and the Danube. You can visit an almost 400-year old church, see a traditional wooden cog railway wagon, have coffee and a snack and go wild with your panoramic camera (I don’t have one but Hugo was still kind enough to take a pic of me.)

Vienna bicycle tour. The second hill, Leopoldsberg, was a 15 minutes ride from Kahlenberg. Behind a curve, three Ukrainian Cossacks in bronze: another reminder of the Turkish Wars in Vienna in the 16th and 17th centuries.

Leopoldsberg’s hilltop was much smaller than Kahlenberg’s and closer to the Danube. You can see the mountain’s church far down from the local wineries, as we did later. The adjacent castle is currently being restored.

At least the area around the castle and the church should re-open at the end of 2017. 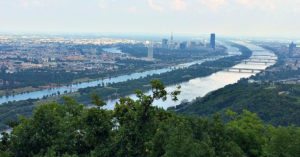 Even so, it’s worth every watt of your electric bike to visit Leopoldsberg because of its breathaking views of the Danube, the Danube Island, the Old Danube and skyscrapers of ‘Donauplatte’, and the city. Besides, you will stand at the very edge of the Eastern Alps! 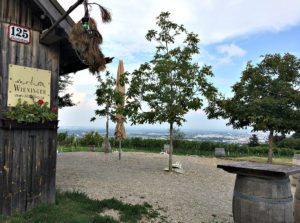 Vienna bicycle tour. Hugo waved a carrot for the way down: We would exchange our water bottles for glasses of local wine and snacks at Heuriger Sirbu, one of my favourite wineries on Nussberg. The descent presented more lush vineyards, rustic outdoor wine taverns and excellent views of Vienna. As before we cycled along paths that no car, let alone coach, would be allowed to take. 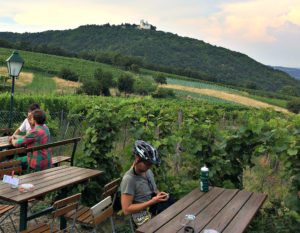 Heuriger Sirbu was one of those wine taverns that hold on to tradition with a vast choice of fine wines from the vintners’ own production, and with a small selection of warm and cold dishes. We sat on wooden benches on the large outdoor terrace right next to the vineyards, talking about Vienna for foreigners and bilingual kids. Hugo and Mike chose the perfect view of the church on Leopoldsberg where we had just descended.

The way back opened 25 minutes of new paths through green vegetation and residential bliss. It’s hard to get closer to typical Viennese hideaways than at Eichelhofweg… After another round through Nussdorf village we returned on the familiar Danube cycle path back to our meeting point.

Vienna Bicycle Tour: How To Book 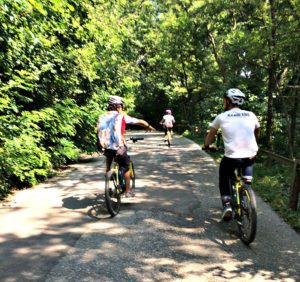 This tour takes place during the warmer months between April and October. Each participant is introduced to his/her ebike before the tour starts. (You’ve got basically three gears, no rocket science.) You will get a helmet and a water bottle. Find out about prices and availabilities.

Extended Wine Tasting Tour: Add 90 min to your trip and you will tour a 900-year-old wine cellar followed by wine tasting. Read more.

Note: I was invited by the tour operator. All opinions expressed are explicitly my own.