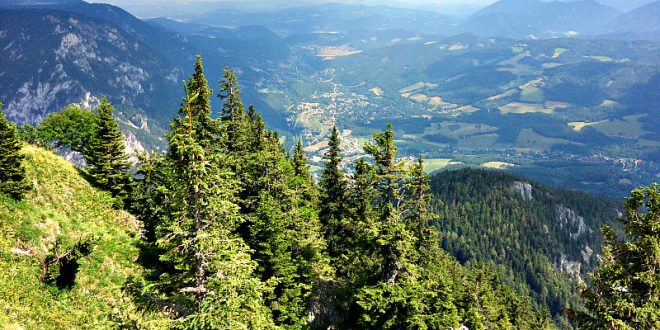 Vienna Alps – Austria’s Semmering and Rax In A Day

Vienna Alps. Did you know that the Alps are just an hour’s drive from Vienna? At the foothills of Europe’s largest mountain range, the Rax and Semmering create Alpine feelings. That said, you will find easy hiking paths, lovely historic villas and lush surroundings as well. In fact, the kind of things Empress Sissi, Sigmund Freud, baron Rothschild and many other Viennese already enjoyed. Here is my day’s guide to the Wiener Alpen.

Hiking In The Rax Alps 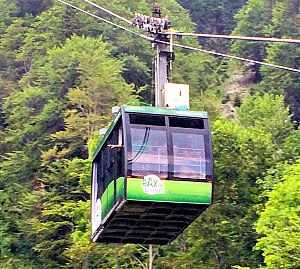 Taking the cable car up to the Rax summit is the quickest way to enjoy panoramic vistas. In less than 10 minutes you glide speedily across tree tops, Alpine meadows and rocky mountainsides. While the cable car is state of the art, it was the first touristic funicular in Austria some 95 years ago.

Up there at almost 1,600 meters, the limestone plateau opens up surreal vistas of mountains and valleys. There are several hiking paths connecting Alpine shelters with panoramic vistas. Where ever you walk creeping pines and protected rare plants accompany you. 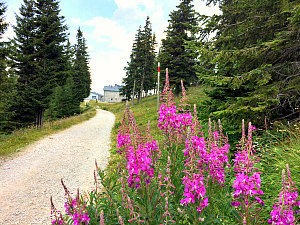 If you just have two to three hours on the Rax, walk to Ottohaus shelter on a broad largely flat path along the mountain top, at 30 minutes from the funicular station at the top. In the winter you can take a guided snowshoe walk there in about 40 minutes.

In the spring and summer, the Rax Alpine Garden just underneath Ottohaus merits a visit: Imagine a carpet of lupines, columbines, milkwort, mountain avens, campions, and even edelweiss and gentian!

Another really scenic hike is to Luckerte Wand, an amazing rock formation including several caves, near the Rax Alps. You can hire your own private guide for the Luckerte Wand hike, which takes about two hours. 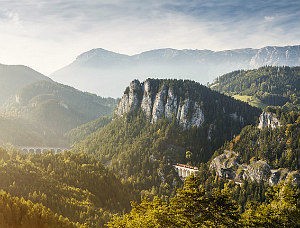 Being part of the Vienna Alps the Semmering saddle south of Rax will ring a bell with railway engineers. In the mid 19th century Carl Ritter von Ghega broke ground building the world’s first normal lane mountain railway: the Semmeringbahn.  While you can hike along the historic railway track and its iconic bridge are a UNESCO World Heritage Site mostly modern Austrian Railway carriages now rush through between Vienna and Graz.

Probably the most exciting place to visit is Zauberberg mountain, where my kids learnt to ski. If you are not into winter sports, take a hike in the summer. Like at the Rax Alp, you can take a cable car up to the mountain top. A little lower than Rax’s hilltop station, Liechtenstein mountain lodge is at 1,340 meters above sea level.

For short hikes there are three paths allowing between 30 minutes and three hours of hiking between Sonnwendstein and Hirschenkogel mountains. Alternatively, you can join a wildlife biologist on a private day hiking trip to Semmering. Through July and August, the cable car operates daily, otherwise Thursday to Sunday (as per 2019). 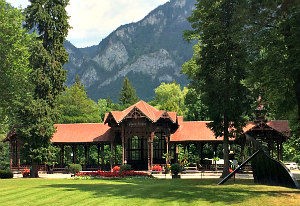 Once THE summer resort of the Viennese society, the town and climatic spa of Reichenau has left an air of nostalgia. Against the backdrop of the Viennese Alps quaint town houses mix with stunning villas. By the way, it is from here that Vienna gets his tap water from!

Just next to a mountain range a riverside hiking path leads to a manicured park with flower beds and a lake. Whereas the impressive wooden pavilion once resonated with folk choirs and brass music bands it now houses farmers’ markets and festivals. 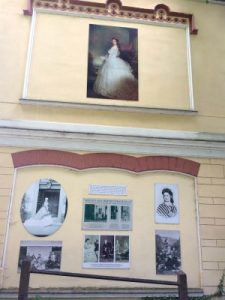 Close to the center, affluent Viennese had followed Empress Sissi and Emperor Francis Joseph in setting up camp. After the Southern Railway connected Reichenau with Vienna in the mid 19th century a villa construction boom started in this sleepy town. Across the Schwarza river the Sisi Schloss, aka Rudolfsvilla, became a summer retreat for the young Habsburg family. Though not open to the public you can see various paintings, historic photos and information on the outside wall.

If you are a Sigmund Freud fan, pass by the hotel he used to stay when in Reichenau. At Hotel Knappenhof, general manager Brigitte Klenner-Kaindl has collected various original objects and documents. Among them is case study ‘K’ about the sister of the hotel’s builder, and the only BBC interview of Sigmund Freud. Do contact the hotel in advance if you would like to see the collection. 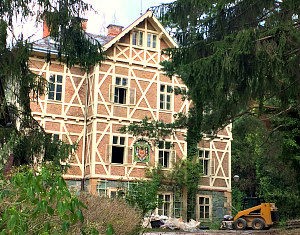 On the other side of Reichenau you will find pink Villa Wartholz. Until 1918, it was also the residence of the last Habsburg Emperor and his wife, Charles I and Zita. Erstwhile a reclusive society spot for imperials, nobles and celebrities, you will still find it difficult to access the privately owned villa.

Instead, head around to the revitalised Wartholz nursery for coffee and cakes (Wednesday to Sunday).  If you visit during the week, sneak into the art gallery of nearby Schloss Rothschild to see the castle’s interiors. In the late 19th century, Baron Nathaniel Rothschild built the magnificent castle to outshine the Habsburg neighbours.

While the Reichenau villas all display an elegant historic chic one famous dwelling went against the trend. High on the hills of neighbouring Payerbach Modernist guru Adolf Loos built a retreat for Viennese industrialist Paul Khuner. Far from purist, however, Loos chose to develop the local traditional farmhouse style to create a modern and comfortable home. At first sight, it looks like a charming old farmhouse but reveals quirky features close up: For example, in order to operate the more durable but heavy metal window shutters, Loos let them roll on small wheels along the facade! 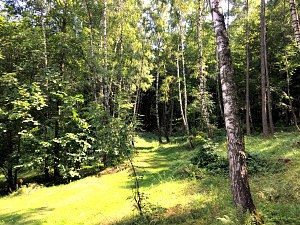 When we had lunch on the panorama terrace of the Looshaus hotel and restaurant I inspected the interiors. At first, the side entrance felt small and the ceiling hovered closely above my head like in a usual farmhouse. Unexpectedly, however, the main restaurant room (former living room) opened up into a lofty gallery with two-storey panoramic windows inviting a lush mountain scenery inside. The tasteful 1930s design even included Loos’ two original corner seats near a fire place.

Just behind the house, small paths lead through a sun flooded forest of birches, beeches and fir trees: perfect for a relaxed stroll to soak up nature.

How To Get To the Vienna Alps

You can take fast trains from Vienna to Payerbach-Reichenau in 1.5 hours, and then hire a taxi to go around. Alternatively hire a private car and driver from Vienna – email me at barbara.cacao@vienna-unwrapped.com – or simply rent a car. 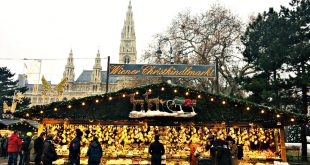 Over the last few years, the largest Vienna Christmas market, the Christkindlmarkt Rathausplatz, has upgraded …