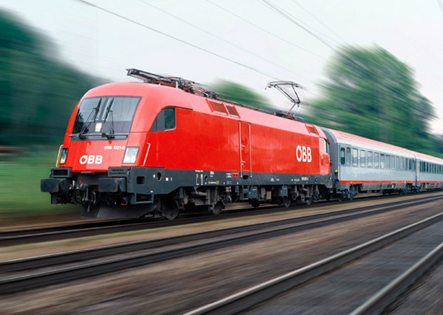 Are there trains to Vienna from London and Paris? How long does the rail journey from Prague or Salzburg to Vienna take? Does the Eurostar stop in Wien? As one of Europe’s main railway hubs, Vienna connects to most major cities via high speed trains.  To plan your trip, get the facts, ticket information and a train connections tool here. 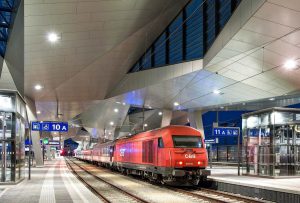 Within Central Europe, there are lots of fast and comfortable connections to Vienna. If you are located in Belgium, France, Germany, Luxembourg or the Netherlands, choose a highspeed railway journey with Intercity Express (ICE), or with Railjet if you are based in Budapest or Munich.

You can also take one of the over night trains to Vienna from several destinations in Belgium, Germany, Italy, Poland and Switzerland.

The Austrian Railways (OEBB)are offering a discount card (VORTEILScard) for different target groups such as families, adults, people aged under 26 or over 60. If you order the card online, you will get a 50 percent reduction on your rail journey. Further information on the VORTEILScard and how to buy

Along Austria’s busiest intercity route you have on average two choices of direct high speed connections every hour during the day. Either head with OEBB’s Railjet Express in 2 hours and 22 minutes to Vienna’s Central Station, or choose private train operator Westbahn to get you there in 2 hours 32 minutes to Vienna’s Westbahnhof station. While Westbahn tickets may sometimes come out cheaper customer reviews often cite lack of available seats and unfriendly staff.

To reduce emissions Austrian Airlines removed its flights between Vienna and Salzburg in July 2020. Instead, travellers combine rail and flights with AIRail combo tickets, which can be booked on Austrian Airlines’ website. There are three daily connections from Salzburg to Vienna Airport, without stops or changes. If you have Miles& More, you can also collect award miles for the AIRail connection to the airport.

Because Vienna and Budapest are so close, high speed trains whizz you from one to the other capital almost every hour during the day. Taking the Railjet from Budapest Keleti pu station to Vienna Central Station (Wien Hauptbahnhof), the journey takes only 2 hours and 40 minutes. In fact, this makes a day trip from Budapest to Vienna or vice versa very feasible.

3. Trains To Vienna From Prague: 4 hours

Being one of the most popular rail routes in Europe, the Vienna – Prague connection is effortless. If you take the Euro City (EC), Railjet or Regiojet high speed trains you will make the journey in just over 4 hours. From Praha Hlavni Nadrazi train station, trains depart almost every 30 minutes to Vienna Central Station in the mornings, and on average every 75 minutes in the afternoon.

Traveling from Munich past Salzburg to Vienna, the fastest option is The Austrian Railway’s Railjet Express, which takes you directly to Vienna in four hours. During the day, expect to catch a connection every two hours. For a stopover in Salzburg, you can additional take German Railways’s DPN train to Salzburg, and then move on to Vienna with either ÖBB or Westbahn’s service.

Unlike with closer destinations there is no direct train to Vienna from Paris. The fastest connection with just one change takes 11 hours and 41 minutes. From Paris Est station, head first for four hours to Frankfurt taking the French TGV high speed train. When in Frankfurt, change to the ICE high speed rail for Vienna Central Station. The fastest connection takes 10 hours and 35 minutes though you will need to change in Stuttgart and Mannheim, Germany.

Once you have seen Venice, hop onto the OEBB’s Nightjet in the evening and wake up in Vienna the following morning. In general, trains leave every night from Venice Santa Lucia station, with a few exceptions. For the 10 hour 50 minute fastest direct connection to Vienna Central Station you can choose between sleeper trains, couchettes and the usual train seat.

Although the Eurostar does not go directly to Vienna, rail journeys between London and Vienna just require one change. Definitely since the Austrian Railways introduced their new Nightjet sleeper train connection to Brussels, London has edged a little closer to Vienna. From London’s St. Pancras station, embark first on the Eurostar to Brussels in four hours. From Brussels Midi, take the Nightjet sleeper train on Mondays or Thursdays on a 14-hour journey to Vienna. From late 2020, the Nightjet is expected to depart three times a week from Brussels or Vienna.

The easiest way to travel to Schwechat airport is by City Airport Train. It connects Central Vienna with the airport in 16 minutes. Find out more about trains to and from Vienna International Airport (Schwechat).