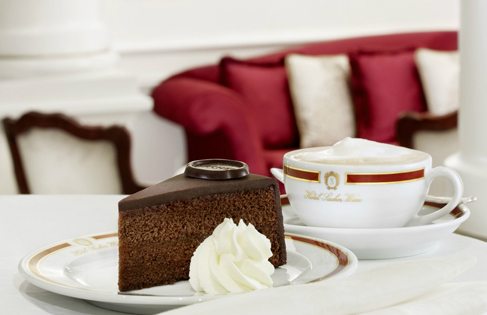 Sacher Torte – History and Recipe of Our Sacher Cake

There is so much hype around our Sacher Torte. Though I honestly think other Austrian desserts deserve at least the same attention, I can’t deny I like this cake. Therefore, here is my total guide to the Sacher Cake.

The original cake derives its special hype from three sources: First, its ingredients and method of preparation. Second, its controversial history. Third, its cult brand.

The original recipe of the cake has been kept a secret since almost 200 years. At present, it is locked away in the safe of the Hotel Sacher Vienna.

However, there are various top patisseries in Vienna, such as Demel and Aida, which prepare delicious Sacher cakes.

Creation And Battle Of The Sacher Torte

in 1832, years after the Congress of Vienna, Prince Metternich commissioned his chef to create a new dessert. As the chef was ill, his apprentice Franz Sacher took over and created the cake that still carries his name. At that time, chocolate cakes had been known for 100 years in Vienna, and chocolate cake recipes were already included in a few Austrian cook books.

Franz’ specially created recipe was a success. Four years later the Sacher Torte was deemed suitable for the Imperial Court and landed on the Emperor’s and Empress’ plates. They loved it.

His son Eduard later perfected the recipe at his work place at Patisserie Demel, which supplied its cakes and desserts to the Imperial Court and also sold them to the broader public. In 1876, Eduard Sacher founded the Hotel Sacher and started selling the Sacher Torte there. Its success spread quickly, in Austria and overseas. In 1934, the Hotel Sacher went bankrupt and Eduard Sacher’s son Eduard (junior) started working for Demel like his father. He transferred the single ownership of an Eduard Sacher Torte to Demel.

In 1938, when Adolf Hitler annexed Austria to the Third Reich, the battle for the original Sacher cake started between Patisserie Demel and Hotel Sacher. It was sparked by the Hotel Sacher’s registration of the brand Original Sacher Torte and the street sale of the cake.

At the centre of almost 20 years of dispute was the rightful use of the brand, the question whether the original cake had a layer of apricot jam in the middle, and whether it was made with butter or margarine (I am not joking).

According to the jurisdiction of the High Court, only the Hotel Sacher is allowed to use the name Original Sacher Torte and the characteristic chocolate seal. Its cake has two layers of apricot jam. Patisserie Demel can use the name ‘Eduard Sacher Torte’. (It now sells it as Demel’s Sacher Torte). The Demel Sacher cake has one layer of apricot jam underneath the icing, and a triangular shaped seal (see photo).

There are dozens of recipes to prepare Sacher cakes. The Sacher Cook Book, publicised by Alexandra Gürtler (the Gürtler family has been running Hotel Sacher for decades) assures that its simplified recipe gets pretty close to the original one.

Don’t store the cake in the fridge. It needs a room temperature of about 22 degrees Celsius.

You can find another lovely recipe for Faux Sacher Cake in the cookbook Tante Hertha’s Viennese Kitchen.

back to Austrian Food