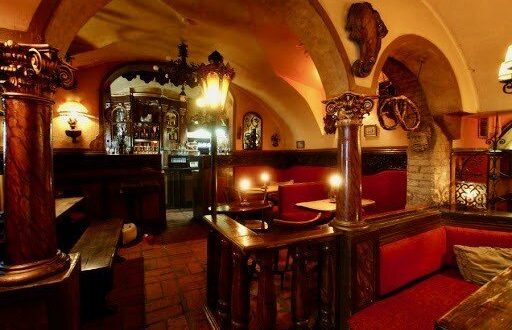 Keller Vienna Restaurants: Are They As Good As They Seem?

Keller Vienna Restaurants. Do you find cutting your Schnitzel beneath vaulted ceilings an irresistible thought? Located mostly in the city center, Vienna’s romantic keller restaurants let you fork up history and (food) culture in one big bite. However, the ongoing international stair run down the Kellers has created two types of cellar restaurants: those that cut it with guidebooks and travel agents, and those that quietly cut through the noise. To find out what to expect from each restaurant, check the list below, ranked by international popularity.

Before that, let me share Vienna Unwrapped reader Kathy Amundsen’s email, which inspired me to flesh out my initial advice to her.

I went to school in Vienna in 1974. I dated an Austrian, and he took me to a very romantic keller. Before my return trip to Vienna I am interested in finding it again. From what I remember they not only served wine, but I had steak tartars. It’s been many years and I simply cannot remember the name of this place. It was a place tourists (or American students) didn’t typically go. Do you know of this place?

Opening Hours: daily, from 11.00 am to midnight

While the 19th-century neogothic Knight’s Hall usually welcomes tour bus groups, you will find a mixed group of locals and tourists in the smaller Ziehrer hall. Among the keller’s most praised dishes is the succulent Zwiebelrostbraten (roast prime rib with fried onions).

Keller Vienna Restaurants. Who wouldn’t want to experience the old world charms of an ancient monastery cellar right underneath glitzy Albertina museum? Run by Josef Bitzinger, VP of Tourism at the local chamber of commerce, the cellar of the former Augustine monks welcomes hungry sightseers in search for real Vienna on their plates. Like in the other cellars, wine tavern food, from cold meat platters to crispy pork knuckles and gulash, dominate the scene, along with home made draught beer. In the past years, the keller has not always scored top on food quality and customer service. From Wednesday to Saturday evenings, fiddlers and accordion players fill the space with Viennese Schrammel wine tavern music.

Opening Hours: daily, 11.00am to midnight 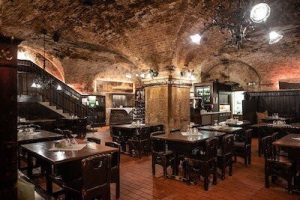 Keller Vienna Restaurants. Quite legitimately, the 600-year-old former wine storage depot of Melk Abbey could have maintained its historic decorations. Since 2017, however, the six spacious halls proudly display their time-honored wooden benches, bare brick vaults, cast-iron lightings and fresh green cushions, along with a few modern elements. And that’s that. As for the menu, the Melker Stiftskeller goes along with the general keller tradition of hearty Austrian cuisine, from crispy pork knuckles to gulash and Wiener schnitzel with potato salad. Especially in the spring and autumn make use of seasonal offers.

Although the restaurant consistently promotes its rooms for local private events, the international travel community has long got wind of the atmospheric place.

Keller Vienna Restaurants. In this keller Vienna’s warriors against the Ottomans found the perfect ammunition in 1683: Because the original wine cellar was close to the city walls and main fighting areas, cellar owner Prince Esterházy supported the warriors with generous quantities of free wine. For centuries, the Hungarian Esterházy family was one of the most loyal aristocratic families to the Habsburg Emperors. Among the wine tavern’s most prominent guests were Austrian composers Joseph Haydn, artist in residence at the family castle in Eisenstadt, and Wolfgang Amadeus Mozart.

Today, the urban city Heuriger serves traditional Austrian food to a mix of locals, travelers and tourist groups. While most visitors praise the food, there seem to be occasional glitches with the service. To be clear, gone are the days where this was a locals’ haunt and insider tip. Unusually for a wine tavern you also get beer. As for entertainment, not only does the keller have live traditional folk music, some musicians would even show up at your table, and in some instances ask for a set tip. 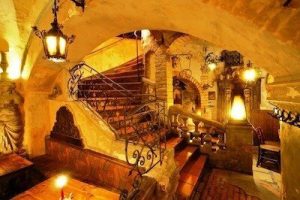 Keller Vienna Restaurants. Just off Am Hof square traditional Brezl Gwölb hides where Ledererhof alley snakes through between Drahtgasse and Färbergasse. In fact, Ledererhof was the former leather makers’ guild, and later on a bakery that produced one of the first lye pretzels in Vienna. Dating from the 13th-century, the gabled house boasts a baroque façade with two delicate relief medallions. Inside, Brezl Gwölb’s three basement levels display an equally elegant setting underneath their vaulted ceilings, such as columns and red velvet upholstery. During warm summer evenings and for lunches consider eating out in the cobble stoned alley, with a view of the last remnant of Vienna’s city wall.

The restaurant’s classic Austrian menu includes a few lovely dishes such as Styrian beef stew (Steirisches Wurzelfleisch) and a fluffy cream strudel (Milchrahmstrudel). Unlike the other Kellers’ usual folk music, classical music plays in the background. 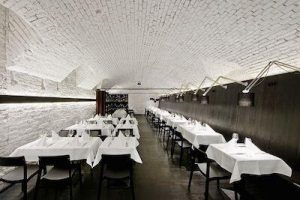 Keller Vienna Restaurants. In shocking contrast to the cellars packed with historical flair, Gmoakeller manages without the knick-knack. In fact, the word Gmoa means Gemeinde (community) in Viennese dialect. Where legendary owners Aunt Mitzi and Aunt Grete let bowling balls roll and jazz bands play, a neat row of resopal tables now lines up in a white-washed brick vault lined with dark wood panels. Being older than neogothic Rathauskeller, at 160-years of age, Gmoakeller tells a tale of Viennese community life:  In the 1940s, the former Wimmer tavern turned into a trusted neighborhood forum, where local news were exchanged and families even deposited their apartment keys.

Today, the ground floor in its original tavern style hosts a good mix of Viennese and travelers. On Friday and Saturday evenings, a mixed crowd supplies the cellar’s minimalist framework with modern community vibes. What to eat at Gmoakeller? Even if you are not a fan of its legendary roast liver with onions, Gmoakeller’s well executed fine Viennese cuisine will not disappoint.

Opening Hours: Monday to Saturday 11.00 am to midnight; closed on Sunday

When out in the Vienna Woods, the Krug family’s Altes Zechhaus represents the best address for wine cellar romantics and great food. Located in the Renaissance vintner village of Gumpoldskirchen, the 16th-century Heuriger (wine tavern) and former meeting point of the local guilds offers cosy space where wine has matured for decades in old barrels. Unlike the often frenzied business of Vienna’s popular kellers, local stalwart Altes Zechhaus focuses on quality food from the region, and excellent wine from its own vineyards at its doorstep. Although my own experience has always been good, there have been reviews about occasional service hiccups.

By the way, the wine cellar is not the only fantastic space – do also climb up to the Heuriger’s gothic attic, or out into the courtyard.

Like at many Heurigen, thanks to obtaining a full restaurant license, the menu has long extended into that of a proper restaurant. Especially in the spring and autumn, go for seasonal specialities such as baked porcini mushrooms and fresh asparagus dishes.