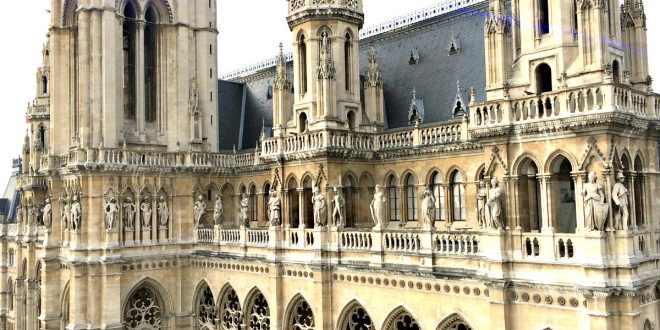 What is the Rathaus Vienna and Rathausplatz? And what is there to see? In brief, the Rathaus is Vienna’s City Hall where the local municipality and mayor legislate and administer everything from urban planning and transport to education and leisure. The grand neogothic building boasts an impressive Council chamber and festival hall, as well as the Coat of Arms halls, a grand staircase and a romantic arcaded courtyard.

On Rathausplatz, the large square in front of the Town Hall, a dozen large scale festivals and events draw residents and visitors each year.

To find out what to expect and how to prepare for a visit read the compact guide below.

What To See At Vienna City Hall

Rathaus Vienna. When the baroque Old Town Hall (Altes Rathaus) in central Wipplinger Strasse burst at the seams in 1850, Vienna built a new Rathaus along brand new Ringstrasse boulevard. Like most buildings along Ringstrasse the City Hall emulated a certain historic style. Hence, the pointed arch windows, embellished colonnades, statues of historical figures, pinnacles and spires are not from the Gothic era but from the second half of the 19th century.

What I find most spectacular outside is walking beneath the Vienna Town Hall’s huge black cast iron lights lining up in the front arcade. There, you can feel the Rathaus’ historic weight, despite its relatively young age.

The enormous festival hall’s shiny oak parquet reflects the light of dozens of chandeliers. From the gallery loggia, the views of the hall, the vaulted ceilings and historic statues are most breathtaking.

Otherwise typical side attractions such as the staircase and an arcaded courtyard add substantially to the Rathaus’ palatial splendor: Left and right of the courtyard, two grand staircases line up delicate columns made of different stones from each Austrian region. In the landscaped courtyard, the City Hall feels like a mix of a monastery and North Italian palazzo with its pointed arch arcades and decorated façades.

Rathaus Vienna. Curiously, the most iconic element hides prominently, but well out of sight: On top of the 100 meter-high tower, the Rathausmann guards the City Hall. The 3.4 meter tall medieval knight was made out of Russian copper kopecks. Because of his iron skeleton the Viennese municipality likes to believe in the Rathausmann’s symbolized iron determination against corruption and abuse of authority.

Due to safety reasons climbing up the City Hall’s tower through its staircases is not permitted.

Rathaus Vienna. Every Monday, Wednesday and Friday at 1.00 pm you can take part in a free guided tour through the Rathaus. While the tour is in German language, non-German speakers can use audio guides in English, French, Spanish and Italian. In general, participants widely praise the guides, and love the chance to use the City Hall’s nostalgic open paternoster elevator before or after the tour. (They are publicly accessible and safe.)

Although the tours are free, you will need a ticket to enter. My tip: Grab your ticket right in the morning to avoid coming away empty-handed and to confirm that tours take place (in case of council meetings there are no tours). The tour meeting point is at the City Information (Stadtinformation), entrance Friedrich-Schmidt-Platz 1.

NOTE: Due to Corona Virus safety regulations, no guided tours take place as of September 2020. Before you visit please call +43 1 4000-4001 for updates or check the website.

Public Events At The City Hall

Rathaus Vienna. If you are lucky your stay coincides with one of the glamorous events at the Rathaus Vienna, for example the Concordia Ball or the New Year’s Eve Gala (photo). In the summer, the arcaded courtyard hosts classical concerts. Taking place in the splendid festival hall these events gather residents and a few visitors each year, and are perfect for diving into the glitzy side of Wien’s city life.

Rathaus Vienna. Throughout the year, the large square in front of the Vienna Rathaus hosts numerous festivals and events.

Between January and March, the Wiener Eistraum (Vienna Ice Dream) turns most of Rathausplatz and the adjacent park into an exciting ice skating landscape.

Two weeks later, the Bike Festival rolls in, followed by seasonal markets like the Styria Spring (Steiermark Frühling). On 1st May, Vienna celebrates spring, and in a way Austria’s national holiday (Staatsfeiertag), which goes back to Austria’s first federal constitution from 1934.

In early May, Rathausplatz traditionally hosts the grand opening ceremony of the Vienna Festival (Wiener Festwochen), including a free open air show and live music. In July and August, thousands of visitors flock to the square to try street food and drinks from various stands, and enjoy a concert or film screening during the Film and Food Festival.

Among the most popular events is definitely the ‘Christkindlmarkt’ Christmas Market. Most visibly, a gigantic Christmas tree dominates the scene, surrounded by 150 stalls selling everything from Christmas baubles to mulled wine and ginger bread. If you happen to spend New Year’s Eve in Vienna don’t miss the festivities and fireworks on Rathausplatz.

Where To Eat Near Rathaus Vienna?

Rathaus Vienna. Since the guided tours through the Town Hall start at 1.00 pm here are a few tips for lunch near the Rathaus. In fact, you can also eat at elegant Wiener Rathauskeller in the building’s large basement rooms if you don’t mind tour bus groups.

Address: Rathausplatz 8, 1010 Vienna (NOTE: As per September 2020, Sluka at Rathausplatz is closed until further notice.)

Café Eiles: Behind Rathaus, local residents of adjacent Josefstadt district encounter City Hall officials when having a quick lunch and coffee at this laid back café. Since its refurbishment, the airy interiors mix traditional bistrot tables and coat stands with modern upholstery. To breathe every day Vienna AND have a good meal the Eiles is a great choice.

How To Get To Rathaus Vienna

To travel to Vienna’s City Hall, take either tramways 1, 71 or D along Ringstrasse boulevard until ‘Rathausplatz/Burgtheater’ stop. Alternatively, take metro U2 to ‘Rathaus’, just behind the building.