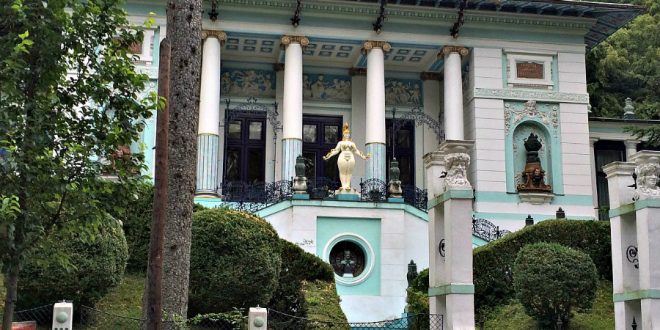 Inside Otto Wagner Villa and Ernst Fuchs Museum in Vienna

If you love Art Nouveau and modern art the Otto Wagner Villa in Vienna opens an other-worldly experience. Hiding on a hillside in Western Vienna the Jugendstil mansion and museum blends Fin de Siècle art and Fantastic Realism. Find out what to encounter in the villa and how to visit.

Otto Wagner Villa. Yes, it’s Otto Wagner, but not as you know him: In 1888, 16 years before the groundbreaking Viennese architect shocked locals with a stern bank building he reveled in Italian Renaissance for his own villa. Massive columns, a majestic outside staircase, an orangery and ornate decorations framed Wagner’s affluent middle class lifestyle.

For more than 20 years Otto Wagner and his family hosted glittering receptions and summer parties there. Among the local celebrities frequenting these gatherings were artists Gustav Klimt, Josef Hoffmann and Gustav Mahler. 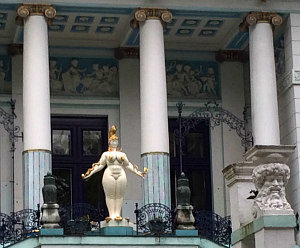 Nowadays it’s neither all about Renaissance nor Art Nouveau: To begin with, the well fleshed out female statue overlooking the staircase, for example, is NOT Wagner (not even as you won’t know him). Welcome to Ernst Fuchs’ world of Fantastic Realism, and his private museum.

Although a next generation artist, Fuchs had admired the Otto Wagner Villa since he first eyed the neglected building in the 1930s as a child. More than 30 years later, the successful painter managed to fulfil his promise to his mother and bought the villa for her, consequently saving it from demolition (!). 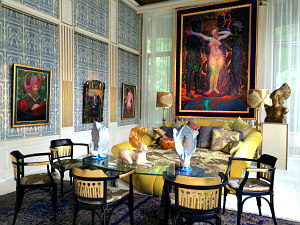 Otto Wagner Villa. On just two floors the villa spreads out four salons, a dining room, and a Roman bath, with an enchanted garden next to the left wing. Once you enter, the Blue Salon pushes you straight into a wild mix of shapes, colours and visuals. While at first sight Ernst Fuchs’ mystic art clashes with Otto Wagner’s style it does draw intriguing parallels and continuities.

Much like Wagner drew from historic architectural styles, Fuchs wanted to redefine Renaissance style painting. The co-founder of the Vienna School of Fantastic Realism also used biblical figures in his works of art, and those from Greek mythology. Most fascinating detail: paradise and hell, the exhilarating and the depressing, were literally just around the corner of each other. 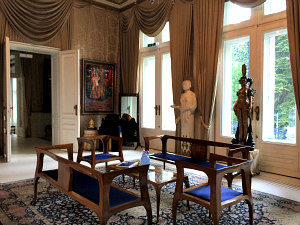 Otto Wagner Villa. Like Wagner, Fuchs, too, designed furniture. While most of the villa’s movable items got lost during the ensuing decades, Fuchs both re-interpreted and freshly designed its interiors.  To pay tribute to Wagner, Ernst Fuchs created many pieces in Art Nouveau style, such as the chairs and table at the Grand Salon (photo).

Fuchs also added a blue Art Nouveau style ceiling in the former billiard room, now Blue Salon. For the Grand Salon he bought Jugendstil statuettes that complemented his own more voluptuous creations. All in all, Fuchs carefully modernised the villa while developing a perfect home for his expressive artwork and imaginative interiors.

In contrast, while Wagner in later years shocked with rigid minimalist architecture Fuchs shocked with detailed paintings expressing the horrors of war, pain and suffering, but also eroticism, in a super real world. 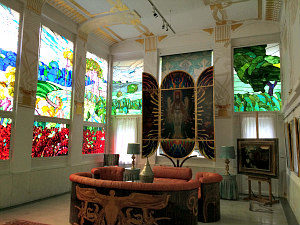 Otto Wagner Villa. Certainly, the delicate Adolf Böhm Hall hosts Fuchs’ most dramatic drawings. In stern contrast to the merry Tiffany glass windows the drawings hang just opposite. Without doubt the artwork speaks volumes about the impact of (post)war Vienna on a teenager like Ernst Fuchs was.

Unlike the artwork around Otto Wagner himself had commissioned the amazing glass windows. Not least because of them the Adolf Böhm hall has turned into Vienna’s most elaborate Jugendstil hall. Add the fantastic triptychon, the mystical creature sofa group and the traditional Persian rug and you get a bizarre cocktail of visuals. 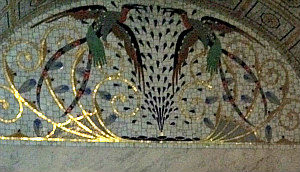 Upstairs, you can see another striking Art Nouveau design in the bathroom: On request of his friend Wagner Jugendstil artist Koloman Moser designed mosaics in a vaulted corner of the ceiling: Two paradise birds spreading their feathers in perfect sync. Again, Ernst Fuchs contributed his part to the missing interiors by creating  mosaic bathtubs.  Like in so many other parts of the house, here, too, he indulged in his adoration of the female body, this time through two fantastic sphinxes. 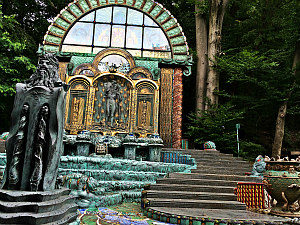 Otto Wagner Villa. If Otto Wagner now strolled through his garden he would search in vain for his bowling alley. Instead he would make a surprise encounter with an organically shaped mythological fountain house, halfway between Byzance and Middle Earth.

Ernst Fuchs’ Nymphaeum Omega is set amidst natural springs and the ‘1,000 year old oak’ (Vienna oldest oak tree). Using a plethora of Tiffany glass stones, apocalyptic angels, Madonna and child, and Moses, it conjures the power of nature and religion. 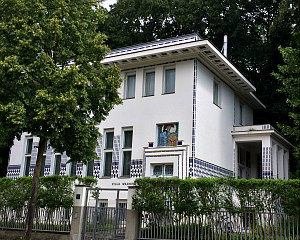 The villa is open from Tuesday to Sunday 10.00 am to 4.00 pm. With the Vienna Card, you pay EUR 8 instead of EUR 11 for your ticket. By the way, just next to the Ernst Fuchs Museum is Otto Wagner’s other villa (photo), built in 1912: smaller and way more minimalist – providing a striking contrast. That villa can just be seen from the outside.

How to Get There: While the Otto Wagner villa is located in the outskirts, public transport connections are good. On top, you get a chance to see an interesting local neighbourhood. If you take metro U4 to Hütteldorf, you’ll also see a few of Wagner’s famous overground railways stations on the way, including the terminal. From there take bus 52B towards Feuerwache am Steinhof and alight at Campingplatz Wien West. From there, walk 8 min up Hüttelbergstrasse until no 26.

Alternatively, rent a car, especially if you plan to see other sights in the outskirts and wider Vienna Woods.