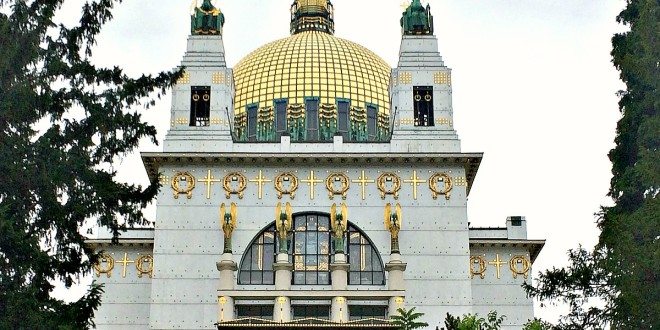 The Otto Wagner church, top gem of Viennese Art Nouveau, lies in the West of Vienna. From the gardens of Schönbrunn Palace you can see its golden dome sparkling through the hills of Steinhof. The church outshines many top attractions. Compared with the dark Nazi history of Otto Wagner’s elegant hospital on the grounds, its beauty is bizarre. Explore Wagner’s wonderful world of shapes and ornaments. Here is my review. 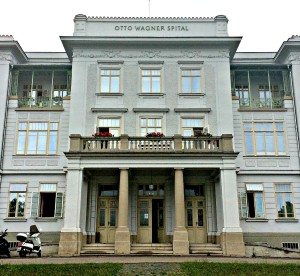 Passing medical personnel and electric laundry carts I made my way to join tour guide and Art Nouveau expert Walter. Between 1904 and 1907, Habsburg Emperor Francis Joseph commissioned the hospital, now called the ‘Center for Social Medicine at Baumgartner Höhe’, originally to cure the Mentally Ill. Young architect Otto Wagner won the design competition for the hospital buildings, the theatre and the church. Actually, the setting reminds you of a 19th century aristocratic sanatorium rather than a community hospital. Otto Wagner structured the U-shaped main building like a palace and decorated it with simple elegance. As for the surroundings, the still operative hospital shares a vast compound of fir trees and two dozen Art Nouveau pavilions.

‘Everything had been designed with a purpose’, Walter remarked as he explained Wagner’s peculiar passion for decorative wreaths. 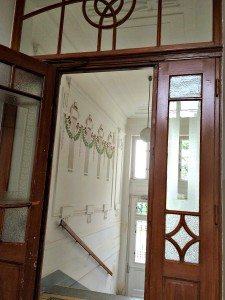 During the first decades, the hospital was a self sufficient town in a town, boasting the Otto Wagner church and theatre, a farm, a nursery, a laundry, a post office, a library, and its very own shuttle train.

Looking forward, the Central European University (CEU), founded by US investor George Soros, is expected to move to the grounds until 2025 while the hospital will close operations. However, the architectural treasures will continue to be publicly accessible.

Pavillon 5 And The Nazi Past

As our tour moved across the compound, we stopped in front of a bed of 772  light steles. During the Nazi regime, the hospital compound was used as a ‘Youth Welfare’ institution. In the name of racial hygiene, the National Socialists performed cruel experiments on children, many of which died there. Each stele represented one of the children. Now, Pavilion V houses an exhibition of Nazi medicine, its racial theory and the systematic murdering of ‘unworthy lives’. Pulling together all my bravery I made it almost half way through. In the meantime, Walter, Jewish himself, waited outside for those who opted to see the exhibition. 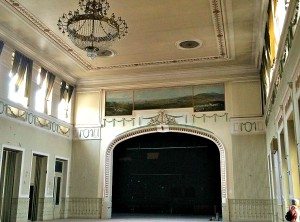 Once in front of another big building, Walter took out his special key to open the derelict Art Nouveau Theatre. Wagner had designed the foyers, the auditorium, the gallery and stage as a multi purpose ‘social house’. From the 1930s the ‘Jugendstil’ theatre was shut down for 50 years.

Despite several attempts of restoration and reanimation the theatre never made it back to its former glory. Today, it is generally closed to the public, and can only be visited during guided tours. 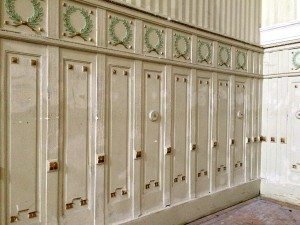 At every corner, the Art Nouveau design excellence of this place bursts through: for example in the sleek wardrobe area with its decorated wooden panels and beautiful tiles, in a glass chandelier crowning a breathtaking grand hall, and in the gallery boasting delicate paintings and leaf ornaments.

From layout and colour scheme through to the design of every single tile and door knob Wagner had meticulously applied his Jugendstil design concept.

The fact that the theatre badly needed restoration added even more magic. 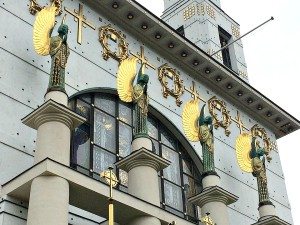 On our way up, the church’s golden dome and decoration were radiating through the woods. The building set in the natural reserve of Steinhof was surreal: another effect deliberately achieved by Wagner.

The church had been built exclusively for the hospital patients and personnel. It was a stunning and revolutionary tribute to the Mentally Ill.

In the Eighties, the City of Vienna meticulously refurbished that masterpiece: fine carrara marble plates shape the walls. The dome and angels’ wings are covered with little more than two kilogrammes of gold. Those four giant angels are among the best of Art Nouveau sculpture you will find in Europe. 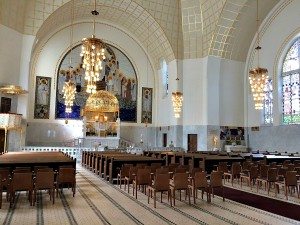 Walter flung the door open: unlike many traditional places of Christian worship, the Otto Wagner church was flooded with light. Cream and pastel colours along with golden ornaments hugged soft shaped walls and furniture. Traditionally, church benches, confession boxes and pulpits have never made a big design statement.

Otto Wagner boldly decided to re-invent catholic church design. He also came up with innovative solutions for the main users of this church. To prevent the spread of germs and foster hygiene he set up a holy water stoup with fresh water trickling into the stoup.

I had to leave a few minutes early. On my way down, mournful long screams of a psychiatric patient resounded across the pavilions: not part of the tour protocol, but an echo from history. 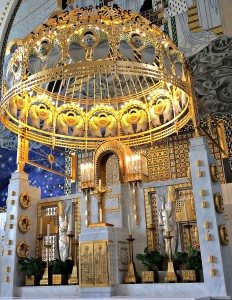 Location: Baumgartner Höhe 1, A-1140 Vienna
Public Transport: metro U3 to Ottakring and then take bus 48A to ‘Otto Wagner Spital’; alternatively take metro U4 to Ober St. Veit and then continue with bus 47a to the same bus stop;
Tours: There are regular group tours in German. You can book private tours in English and other languages on request. Call directly 0043 1 91060 11007 or get in touch with me if you need help.

Vienna Unwrapped reader Nancy Garrick left me this message in 2016: “The thing that really made my trip so special was connecting with Walter. I took a tram out to the Otto Wagner Church for mental patients where Walter was overseeing his assistant’s qualifying tour. What a gem of a church! Something I probably wouldn’t have gotten to on my own but one of the highlights of my visit.” 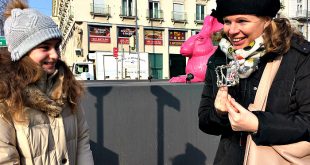