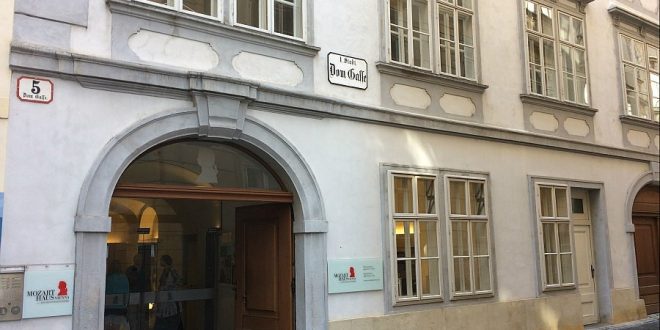 Mozart House Vienna Review. If your love of Mozart goes beyond music explore his private world in Wien. Nowhere else did Mozart compose as much music as during his 10 years in Vienna. Since I have been to the Mozarthaus in Vienna let me share what to expect from this museum and apartment. 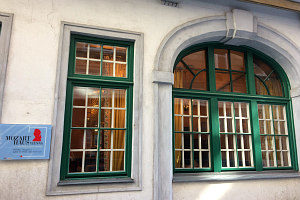 Mozart House Vienna Review. Definitely unpretentious, but not the home of a starvation artist either: Was it not for Mozart’s profile on the signage, most people would have walked past the cream and grey façade. Only when you passed the museum lobby that fine example of private 17th century living became more obvious.

Set in a prime location at a stone’s throw from St. Stephen’s Cathedral, the four-storey building housed the Mozart Museum on three floors, including Mozart’s apartment. During his three years at Domgasse (1784 to 1787) Mozart and his wife Konstanze would not have used today’s main entrance, but the door on the opposite side in Schulerstrasse (photo). 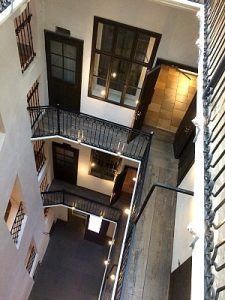 Surely the building’s most striking element was the historic courtyard: Identically structured, each level’s gallery gave access to several units of the house. As the museum visit started on the third floor I spent my first minutes musing about life in 17th century Vienna as I gazed down from the third floor gallery.

Inside, none of the original interiors were left, unfortunately. Given that this was a quite noble apartment, the relative emptiness was a tough fact for visual people like myself. At least no historic fakes spilled the authenticity of ‘planet Mozart’ in Vienna. All in all, even without the expected playful pomp, the spacious four rooms in the beletage, two closets, kitchen and wooden vaults revealed that Mozart led the good life. 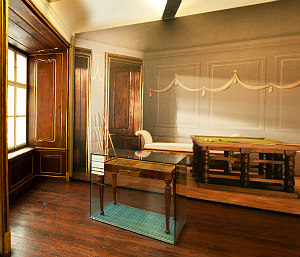 Mozart House Vienna Review. Essentially, the Mozarthouse focused on the composer’s last ten years, which he spent in Wien. At that time, Emperor Joseph II’s ‘enlightened absolutism’ dominated the local zeitgeist, influencing Mozart’s social and professional network and the music this genius composed.

During the Vienna period, for example, Mozart created his opera The Marriage of Figaro (Le Nozze di Figaro) which provided the lesser used synonym Figarohaus for the Mozarthaus. 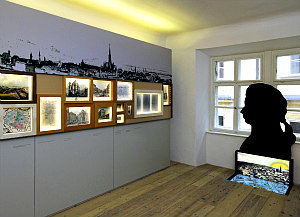 While a modern Mozart museum would have gone wild on multimedia, this one didn’t. Simply because it wasn’t meant to be a multimedia museum.

Instead, equipped with a simple audio guide, I followed a well curated collection of paintings, drawings, quotes and letters. In particular, Mozart’s social networking in the Viennese Salons, his role as a Freemason and living at the borders of the Age of Enlightenment created a story that went far beyond his musical genius.

‘What cannot be said in our day is sung.’ Le Nozze di Figaro 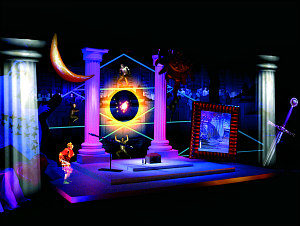 Learning about Mozart’s endeavours in Vienna’s vast musical ‘industry’ was fascinating. However, the issue was complex due to different players with different interests. Starting with key employer Emperor Joseph II a variety of related musicians, music patrons and influencers populated the walls of Mozart’s home. Intriguingly, Beethoven and Haydn formed part of Mozart’s network. Interesting fact aside: Some 40 percent of Mozart’s typical audience were Freemasons.

In general, however, Mozart’s music was not popular at the time he created it because citizens considered it too far ahead for the time. The most striking exceptions were The Marriage of Figaro and the Magic Flute, as a contemporary installation of the Magic Flute opera demonstrated. 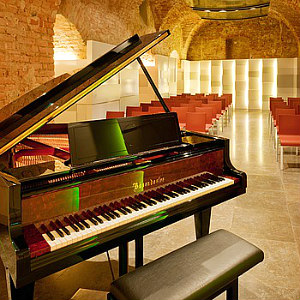 During July and August you can listen to a Mozart piano concert right at Mozarthaus. For one hour a pianist will take you through Mozart’s opera The Marriage of Figaro with the overture, a piano sonata and two rondos.

Unlike glittering concert halls, this music event takes place under the vast brick vaults of the house’s basement. (The acoustics are great!) Funny but somehow, this simple setting gives the concert a special serene note. Since the concerts start at 4.00 pm (Tuesdays and Thursdays) you can combine them well with a visit to Mozart House. Find out more (next concerts expected to take place from 2nd July 2020, please check link).

Mozart House Vienna Review. In conclusion, should you visit the Mozart House in Vienna? If you get a good musical tour guide to bring the museum’s narrative to life, definitely. On the other side, die-hard Mozart fans may find the rather academic setting perfect in itself.

Location: Domgasse 5, 1010 Vienna
Opening hours: daily, 10.00 am to 7.00 pm
Admission fee: EUR 11
In-house guided tours: 60-min tours can be booked individually for EUR 60 per group; I haven’t done one, therefore can’t say how good they are;
How to get there: take metro U1 or U3 to Stephansplatz and walk past St. Stephen’s Cathedral;