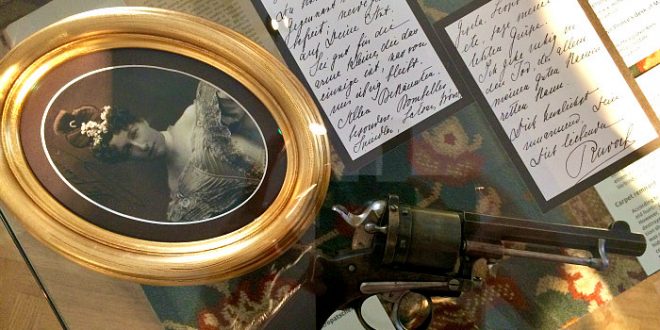 At barely an hour from Vienna, Mayerling Austria holds both a tragic love story and an eye opener. Certainly, fans of the opera Mayerling and history buffs will know the Mayerling incident. On a sunny July morning, I toured the former Mayerling lodge where Habsburg Crown Prince Rudolph’s once shot Mary Vetsera and then committed suicide. Read my review. 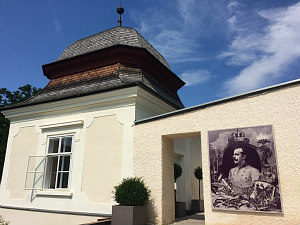 Mayerling Austria. Compared to Schonbrunn Palace this former Habsburg hideaway couldn’t be more different: When Crown Prince Rudolph ended his and his lover Mary Vetsera’s life they died in a small Imperial hunting lodge in the Vienna Woods. Just two years before the Mayerling incident from 30th January 1889, Rudolph had given a house warming party of his new hunting lodge in the Vienna Woods.

Imagine a baroque bungalow, a simple ground level lodge painted in green, with white window shutters, and in part a second floor. When in Mayerling, you can still visit a part of the original hunting lodge at the ‘tea pavilion’ (photo). It is small but gives an impression of the original settings. 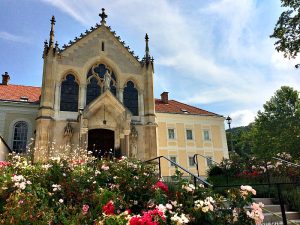 Where once Rudolph and Mary died in the corner room of the lodge, the convent’s shiny chapel now reminds of the Mayerling incident. Instead of Rudolph’s bed, a magnificent altar now invites to prayer. (The bed itself is now exhibited at the Imperial Furniture Depot in Vienna.)

Today, a total of eleven devout Carmelite nuns lead a frugal and secluded life behind the walls of the convent.

At the showrooms, a detailed chronicle unfolds and demystifies the gripping tale. Starting from Rudolph’s very childhood, a series of photographs, drawings, quotes and personal objects gives you a deep understanding of what was going on, long before the two shots fell.

In candid details, the young Rudolph, his family and friends, and his political views and aspirations trace a turbulent life that eventually derails in slow motion as you reconstruct the crown prince’s last days. 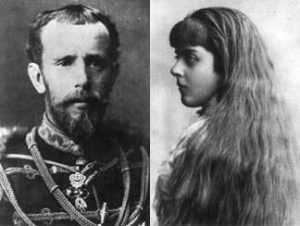 Mayerling Austria. Had the Mayerling incident never happened, Austria’s and Europe’s history would likely be different. It’s true that Rudolph’s political views radically differed from those of his father. While he promoted liberalism, progress and science, Emperor Francis Joseph ran an absolutistic police state.

Under a pseudonym, Rudolph used to distribute his views in a reputable national daily since his father was oblivious to his opinions and excluded him from government affairs – “Rudolph is chatting again.”

In this light, Rudolph didn’t just commit suicide out of a romantic sentiment. He was deeply disillusioned with his political future and that of a free liberal Europe. At the court, several people, including his wife, noticed his increasing despair and restlessness. 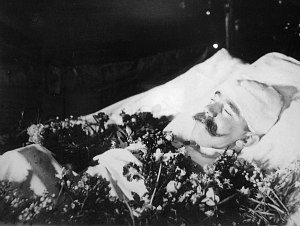 However, Francis Joseph and his advisers played down Rudolph’s deteriorating condition. Abandoned early by his mother Empress Sissi and riduled by his own father, whom he would only meet during hunts, Rudolph felt isolated at court.

In the early hours of 30th January 1889 it took two well-aimed shots for Rudolph to end the life of his 17-year old lover, baroness Mary Vetsera, and then his own at his room in Mayerling.

To be clear, Mary was not Rudolph’s only love. Days before the suicide he still visited his mistress Mizzi Caspar. But he was touched by the utter devotion of Mary, who had only met him two months before at a horse race in Vienna’s Prater.

At the moment of discovery, the court hushed up the suicide and cultivated its own story, based on disinformation, and obliged witnesses to life-long silence. Officially, Rudolph had died of a heart attack. Only later did the authorities publicise information about a ‘mental illness’ to justify Rudolph’s suicide. 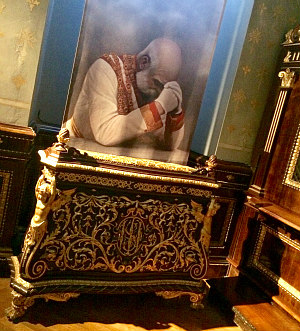 Until the end of the monarchy, the circumstances of the death of Mary Vetsera were kept a secret. While Rudolph was buried in a pompous funeral at the Habsburgs’ Imperial Vault in Vienna, Mary rested in the ‘suicides corner’ at Heiligenkreuz cemetery.

Within days of the incident, Francis Joseph decided to demolish most of the hunting lodge and erect a Carmelite monastery on the site. Clearly, he and his wife, Empress Elizabeth (Sissi), were deeply disturbed. Much too late they realised that they had neglected their son throughout his life.

This photo shows a display of Francis Joseph at the richly decorated kneeler, just before you enter the chapel.

How to get there: either rent a car and drive from Vienna (about 45 min) or join a guided half day tour from Vienna, including a visit to Seegrotte;