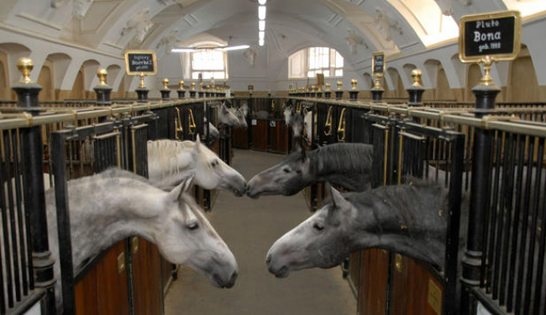 Where do Lipizzaner stallions come from, why are the foals black, and where can you see the white dancing horses in Austria? Whether you want to watch these horses, buy them or simply know more about them, exploit this short guide below.

Where Do Lipizzaner Stallions Come From?

Essentially, the Lipizzan breed is the result of a crossing between old Spanish (Andalusian), Arabian and Berber breeds with local Slovenian Karst breeds. Actually, the Lippizzans Andalusian roots are the reason the Spanish Riding School (Spanische Hofreitschule) in Vienna has Spanish in its name.

Following the first successful breedings, local breeders established the race of ‘Spanish Karst’ horses. From their appearance, Lipizzans are athletic yet their fine mane and tail makes them look utterly graceful.

For the Habsburgs, the Lipizzans were ideal allrounders: Not just were they great for military purposes, but they also excelled in elegant shows, carousels and parades at the Imperial Court in Vienna. All in all, the Lipizzans were fantastic dressage horses. Hence, the Habsburg Monarchs decided to breed them from the 16th century.

To give you an idea of their origins, here is an enchanting video of the Lipizzaner horses at the Stud in Lipica:


But not only Lipica breeds Lipizzans. Lipizzaner stallions are bred across Europe, mostly in Austria and the old crownlands of the Habsburg Empire: for example Bosnia, Croatia, Hungary, Italy, Romania Serbia, Slovenia, and Slovakia. On top of that, you can find major private breeding studs in Denmark, France, Serbia, Slovenia, South Africa and the United States (Illinois).

Why Are Lipizzan Foals Black? 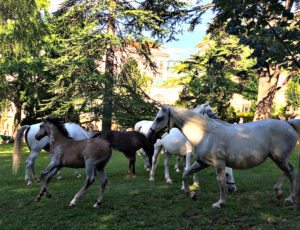 Since Lipizzaners belong to the family of gray horses, they have a dark colour when they are foals. Due to a gene mutation, their coat gradually turns into pure white with each change. This happens when they are between four and nine years old. However, about 1 in 200 foals actually remains dark for its entire life.

In general, there are six main breeding lines of Lipizzaner stallions, which carry their names from their male progenitors: Conversano, Favore, Maestoso, Neapolitano, Pluto, Siglavy. More specifically, the name of each horse derives from combining the name of its father and its mother.

Where The Spanish Riding School Sources Its Lipizzans 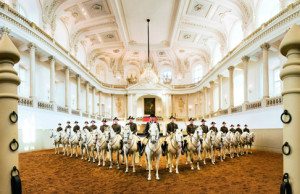 Before they arrive at the the Spanish Riding School the Lipizzaner stallions for are bred at the Austrian Federal Stud in Piber.  Each year, around 30 Lipizzan foals are born there,  in the Southern Austrian region of Western Styria.

During their first years, the young Lipizzans spend their summers on the lush green pastures of Stubalm in the Styrian mountains. As they move around the partly steep and rocky slopes they train their joints and tendons. This is vital for their later career.

At the age of three and a half years the Lipizzans usually arrive at the Spanish Riding School in Vienna to start their training. At that time in their lives, they are still dark coloured. As for total life expectancy, a Lipizzaner can reach until about 40 years of age. In the past years, the Federal Stud Piber has been making a real effort to breed more Lipizzaner stallions in order to secure sufficient supply to the Spanish Riding School. Today, the Lipizzans actually count as an endangered domestic animal breed. 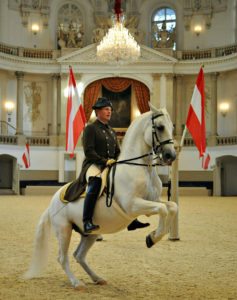 Because Lipizzans are strong, docile and have an extraordinarily good memory they are perfect for training. At the Spanish Riding School, they are treated like athletes: Not only do they require a balanced diet, but a daily targeted muscle training. On top, a Lipizzan at the Riding School usually visits a solarium to warm their muscles, and enjoys magnetic field therapy to stimulate its metabolism.

The young Lipizzaner stallions are trained at the Spanish Riding School as well as at Heldenberg. In fact, the public can watch their daily Morning Exercises to classical music in the large Winter Riding Hall. It takes approximately six years of training for a Lipizzaner to graduate to a school stallion.

As a result of the careful breeding and extensive training procedure the Spanish Riding School values each horse at around EUR 100,000.

Where To See The Lipizzaner Stallions

Almost throughout the year you can see the Lipizzaner Stallions in action at the elegant Spanish Riding School.

At the annual open airLipizzaner Gala show at Heldenberg you can watch the Lipizzans in the green hilly surroundings of Vienna. This is the Lippizzaner’s training center but also summer retreat to recover from their work at the Spanish Riding School. 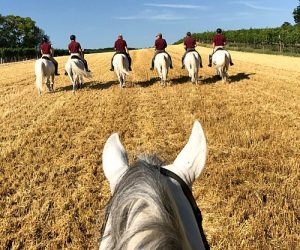 A trip to Heldenberg makes a good day out off the beaten track, and is just a 30 minutes drive from Vienna. The show includes all elements of the High School of Classical Horse Riding, the school quadrilles, pas de deux and the Schools Above Ground.

In addition, the Federal Stud Piber, with historic Piber Castle at the centre, offers guided tours through the stud and visits to their alpine pastures on a regular basis.