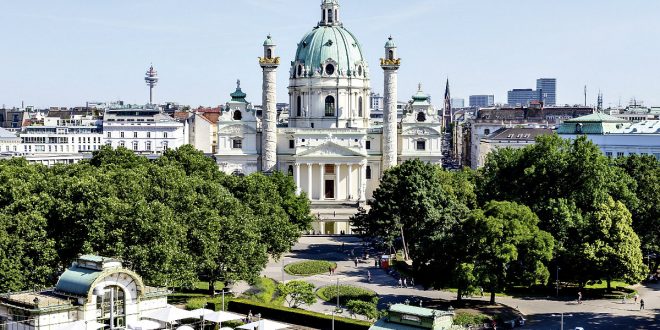 With no shortage of churches, Karlskirche Vienna – aka Church St. Charles Borromeo – ranks top in Austria’s capital. Not just because of its lavish baroque interiors, but for two other reasons: First, Mozart’s requiem and Vivaldi’s Four Seasons regularly enchant local angels, saints and visitors with live sounds. And second, because Karlskirche is Vienna’s only church with a stunning panorama lift, allowing eye-to-eye encounters with the dome’s ravishing baroque frescoes.

Sitting in the triangle between Belvedere Palace, Naschmarkt and the Vienna State Opera, St. Charles Borromeo overlooks a circular water pool in the east of Resselpark, just next to Wien Museum. From the park you can access the various metro lines of Karlsplatz, and Ringstrasse boulevard is a few minutes walk from there.

When Emperor Charles VI, Empress Maria Theresa’s father, vowed to build a church to thank Saint Charles Borromeo for rescuing Vienna from the pestilence in 1716, he knew how to impress. Looking quite Roman-Greek antique from the outside, the inside exploits the era’s rich baroque opulence. Most strikingly, the seemingly circular cupola adopts an elliptic shape from the inside. Although only 40 meters long, the church feels much larger, thanks to the 70 meter high cupola.

While in most other churches you would need a telescope to study the artwork in dwindling heights, baroque fresco artist Michael Rottmayr’s masterpiece allows for a personal close up: Since 2002, a panorama lift and staircase lead 33 meters up to a viewing platform. If the ascent seems daunting, imagine 70-year-old Mr Rottmayr painting those ceiling frescoes lying on his back… Admittedly, the steel staircase doesn’t blend in at all with the interior’s aesthetics. However, given its popularity among tourists the church decided to keep the initially temporary panorama lift, which also contributes nicely to its proceeds.

Is Karlskirche’s panorama lift and stairs daunting when you are scared of heights? Frankly, I found the experience a little testing. Because I had already paid the entrance ticket which included the lift, I first just took the lift. Then I took the stairs bit by bit, until I decided to fully go for it. For me, the trickiest part was not the lift but the stairs, though in the end that ‘adventure’ proved to be totally worth it.

Once up in the cupola, just underneath the cloud ceiling, you finally mingle with the most dazzling candy-colored angels, saints and satans on puffy clouds. All of them are contemporaries of the church’s patron saint Charles Borromeo. Just this fresco alone justifies why Karlskirche ranks among Europe’s most outstanding baroque churches.

Looking down on the other side, don’t miss a closer look at the altar’s breathtaking stucco decorations. Climbing up further, the cupola’s very top round window allows 360 degree views of Karlsplatz, the Vienna State Opera and other amazing landmarks. Only caveat: the windows have mesh wire which does hinder the vistas and photographic aesthetics.

In fact, Karlskirche was the last act of the Habsburgs’ court architect Johann Bernhard Fischer von Erlach, who had also built Schönbrunn Palace.

To create Karlskirche, the constructors and stone masons focussed on very few but durable building materials: first and foremost, red and white marble, and Kaiserstein, a particularly dense and resistant limestone from the Kaiserstein quarry in Burgenland, by then still part of Hungary.

Is there an entrance fee for Karlskirche?

Unusually for Viennese churches, and to the outrage of many locals, you have to pay an entrance fee. Adults pay EUR 8, groups from six people pay EUR 6. Pupils and students enter for a reduced fare of EUR 4 while children until 10 years of age enter free. Most importantly, the tickets entitle you to. use the panorama lift and visit the church’s Treasures and Museo Novo inside the church.

On most evenings of the year, the church hosts one of two classical concert series: either Mozart’s Requiem or Vivaldi’s Four Seasons. Whereas most other churches host chamber music events with a few musicians, St. Charles Borromeo is the home of the Orchestra 1756, named after Mozart’s birth year. Using historical instruments, the baroque orchestra famously unlocks the original sounds and styles of Mozart: Certainly this is one of the best places in Vienna to listen to Mozart’s Lacrimosa.

Why Vivaldi at Karlskirche? During his last years, the Italian composer lived in Vienna. When he died in 1741, he was buried just a few hundred meters from the church, on the grounds of today’s Technical University. Find out more about the Vivaldi’s Four Seasons concerts at the church.

back to Vienna Sightseeing