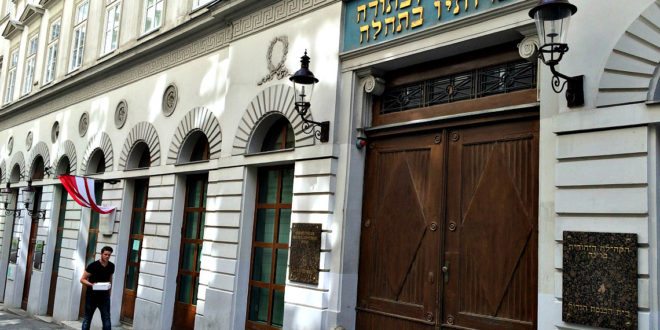 Do you want to trace the foot steps of your Jewish ancestors, when in Vienna? Since the Jewish community in Wien goes back 900 years you’ll have plenty of sites to see. Here are the best places of Jewish Vienna to visit.

“Whenever I visit Vienna, there is this scent in the air that reminds me so much of my Ima (grandma). I don’t know what it is, but it’s special.” My Israeli relative Amira about her Viennese grandma 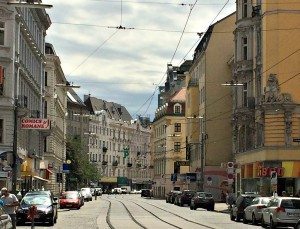 Jewish Vienna. The former Jewish quarter was known as the ‘Matzoth Island’ of Vienna. During the Nazi Regime the inhabitants of Leopoldstadt were almost completely extinguished. To commemorate the deportation of Jewish citizens the Viennese Association Steine der Erinnerung an jüdische Opfer des Holocausts has been placing Stones of Remembrance mostly across Leopoldstadt. One of them, for example, represents the Jewish regulars of famous Café Rembrandt at Untere Augartenstrasse 11.

In recent years, Jewish life has grown more vibrant around the synagogue and popular Karmelitermarkt. The area between Karmelitermarkt and Karmelitersquare is the best place to find kosher restaurants and shops.
My restaurant tips: Bahur Tov, Taborstrasse 19; Novellino, Zirkusgasse 15. 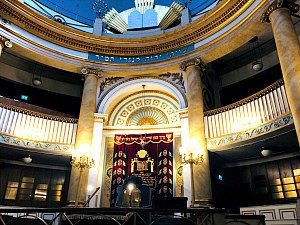 Like a sapphire in a cardboard box, Vienna’s only preserved synagogue shimmers inside a townhouse in a cobble-stoned street.  Located near a Jewish restaurant and lots of bars, the 18th-century gem was devastated and desecrated during the Nazi Pogrom night in 1938, and was bombed in the late Seventies and early Eighties.

During a brilliant in-house guided tour, you will dive into the golden days, when Vienna still counted 200,000 Jews. By far my favourite story from the tour was composer Franz Schubert’s fascination for cantor Salomon Sulzer.

As interesting is the fact that Theodor Herzl’s remains lay in state at the synagogue before his body was transferred to Israel. A few years later, the synagogue was beautifully renovated. Now it is the centre of Jewish religious life. 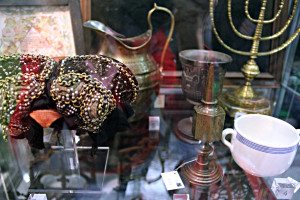 Jewish Vienna. The Jewish Museum Vienna consists of the main building in Dorotheergasse and of the outlet on Judenplatz. While Dorotheergasse highlights Jewish life in the 19th and early 20th century, Judenplatz showcases Jewish Vienna in the Middle Ages, focusing on the thriving Jewish community up to the Shoah in 1420.

What I love about the museum in Dorotheergasse is its candidness and yet fresh perspectives of Vienna and its Jewish community. Find out more about the Jewish Museum Vienna. 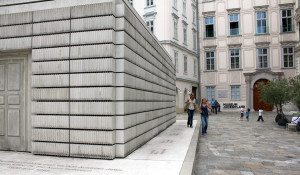 Jewish Vienna. In the Middle Ages, Judenplatz (‘Jews Square’) was the center of the Jewish community. Now a massive Holocaust Memorial contrasts with the square’s baroque town houses: If you look closely, the huge concrete cube is full of ripples. Each of the 65,000 packs resembles a book. And each book symbolises an Austrian Jew who died during the Nazi Regime.

Back in the 1990s, British artist Rachel Whiteread designed the memorial. Around the monument, the platform carries the names of those Austrian places where the Nazis murdered Jews during World War II. 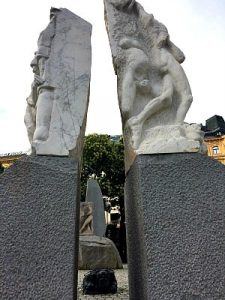 Jewish Vienna. Two large white marble blocks emprisoning human bodies open a small passage to a life size bronzen jew bending down to clean the streets. Austrian artist Alfred Hrdlicka rocked the public conscience about the atrocities of World War II with his ‘Memorial Against War and Fascism’. The Viennese would have appreciated some more positive and forward looking symbolism to look at when on their way to work, the opera or shopping. After the memorial had been set up in 1988, many tourists mistook the jew for a cosy bench to have their sandwiches: He has been wrapped up in barbed wire since.

Location: Albertinaplatz, behind the Vienna State Opera, opposite the Albertina Vienna Museum; 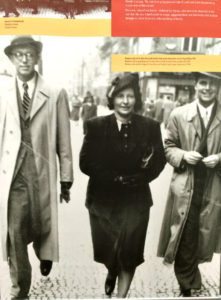 Jewish Vienna. What happened before and during National Socialism in Austria? What lead to its atrocities, who were the key players of Austrian National Socialists, and what role did the Austrian Resistance during the regime? As for today, what is the situation with the Extreme Right in Austria? Unlike any other national research centre, the Documentation Archive of Austrian Resistance collects documents, objects, proofs and memories of national Nazi terror. Extremely revealing.

Jewish Vienna. The city has five Jewish cemeteries. The one located in the ninth district is the most beautiful and oldest of all local cemeteries. Set in a leafy green compound in Seegasse on Alsergrund, it lets you explore up to 500 year old inscripted tombstones. Only in 2013 Vienna unearthed unique antique tombstones dating from the 16th century. Expect to see the last homes of Rabbi Sabbatai, Rabbi Menachem Hendel, banker Samuel Oppenheimer and other famous Jewish Viennese.

Location: Seegasse 9 to 11, 1090 Vienna
Opening Times: Monday to Friday 7am to 3pm; Access through local residence for the Elderly (‘Pensionistenheim’) 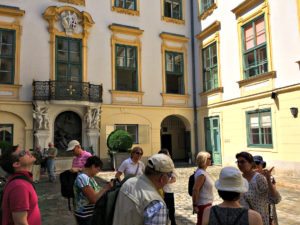 Jewish Vienna. During this long-established guided group tour you will learn in depth the story of the Viennese Jews, from the Middle Ages to now.

When I joined the tour we visited key sites of Nazi Vienna during the Second World War such as the site of the Gestapo house, and learned about the Jewish community. On balance, I found the most revealing part of the tour was our visit to the Documentation Center of Austrian Resistance. Find out more about the tour. 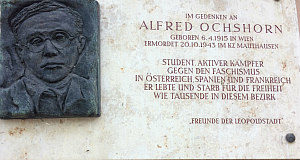 Jewish Vienna. While the Jewish Vienna walk focuses on the ‘official’ sites in the center, this tour takes you to everyday Jewish life. By touring Leopoldstadt you partly follow the ‘Path of Remembrance’ and learn what Jewish life was like before and during the Nazi regime.

Together with tour guide Gertrude, I roamed Leopoldstadt on a sunny July morning. In between old theatres and Jewish apartment blocks Gertrude shared some gripping stories. Definitely the most uplifting part was to explore today’s thriving Jewish community. Find out more about the Jewish Life in Leopoldstadt tour.

Jewish Vienna. If you have personal roots in the city, this tour will give you privacy and a peaceful walk. Ask as many questions as you like and adapt your walk to your special interests. Even before the tour you customise the route to include special places of personal relevance. Read my tour review. 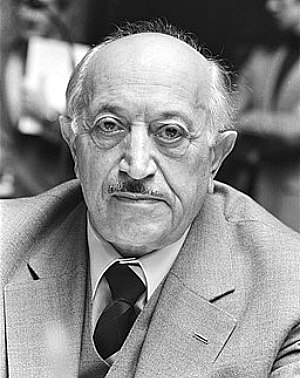 Jewish Vienna. Whenever U.S. diplomats Raymond and Krista White move to a different place they leave no stone unturned. Now living in Vienna they have unfolded the city’s complex history of World War II, Jewish Vienna and the Holocaust: “When creating this walk we surfaced a number of sites that have no signs and are not on any tourist maps. They are forgotten to history.”

Through your own cell phones connected to their app-based audio tour you can follow Raymond and Krista across Leopoldstadt through the city center past the Simon Wiesenthal Institute and the former secret headquarters of the O5 Resistance Group. In a gripping narrative, the second part of the tour revives Wiesenthal and his team’s relentless search for former Gestapo officers. Find out more.

In 2018, I finally found the house in Vienna where my Jewish great grand uncle Max Jupiter had lived before he emigrated to Palestine! Before, my client Rochelle was able to visit her grandmother Pauline’s home when she travelled to Vienna. If you need help with your Jewish ancestor research in Vienna, email me at barbara.cacao(at)vienna-unwrapped.com.

Jewish Vienna. Have you had victims of the Holocaust in your family or would simply like to pay tribute? Then consider going on a day trip to Mauthausen Concentration camp, one of the largest in Europe. Chiefly, it was between the barracks, the quarry, the prison and gas chamber where Hitler’s atrocities became terribly vivid. In particular, Mauthausen’s museum exhibits original objects, takes an account of the crime scene of Mauthausen, and lets you listen to interviews with survivors of the camp. Surely this is an intense tour full of insight. Read more.

back to Vienna Austria Things to Do