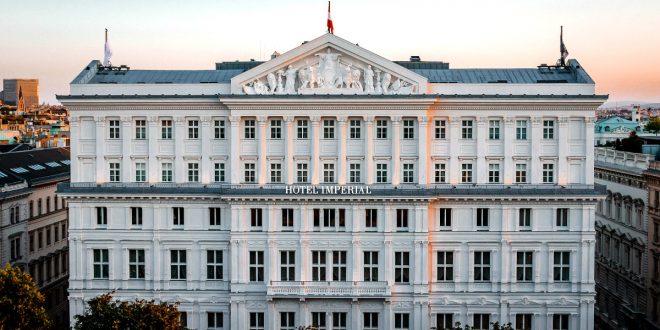 Hotel Imperial Vienna. If you want to gold frame your special trip, go for the boundless luxury of this hotel. Unless you are Queen Elizabeth II or Prince Sultan al Kabeer, you will find Hotel Imperial out of the ordinary. To explore why you should upgrade to the radiant white palace hotel read my comprehensive report.

Hotel Imperial Vienna: What To Expect

Prominently lining up on Ringstrasse boulevard, the Imperial is right next to Musikverein, home of the Vienna Philharmonic Orchestra and location of the famous New Year’s Concert.

At Hotel Imperial ‘cool’ is an unword. On the contrary, old-world exuberance and classical European culture reign proudly and without affectations. Right when entering the lobby you meet sparkling chandeliers, giant paintings of the Austrian Emperors, and shiny marble.

Whereas Hotel Sacher is legendary, the Imperial is Austria’s official residence for state visits. Although you could have expected more stiffness, the receptionist checked me in using that respectful informality that made you feel both special and welcome. 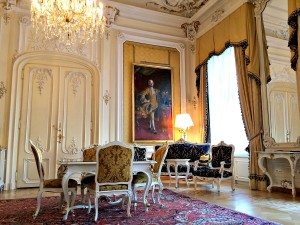 But not only state officials like to dwell in this jaw-dropping town palace. For almost 150 years, international celebrities, doyens of classical music, senior politicians and business people have run over the Imperial.

To name a few, just think of Charlie Chaplin to George Michael, J.F. Kennedy and Bill Clinton to the Queen Elizabeth II and the Emperor and Empress of Japan.

What Type of Room To Book At Hotel Imperial 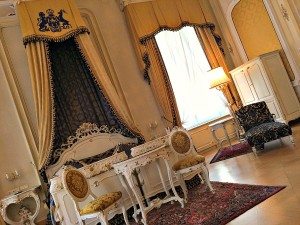 Hotel Imperial Vienna. Being on a par in glamour with Schönbrunn Palace and the Hofburg Palace, the Imperial offers 138 rooms and suites in five categories: starting from a classic double room with optional king or twin beds; a deluxe room; junior suite; executive junior suite and suites in various sizes, from 65 to 100 square meters. The largest interconnected suite solution measures 460 square meters.

If you book a suite, you will get your personal butler service. Upon arrival, he will hand over your personal business cards with the Imperial’s address. Not just will your butler clean your shoes, unpack and pack your suitcases. He will iron your morning newspaper! For ultimate relaxation, he will also prepare a rose petal bath, and advise and accompany you on antiquities shopping trips if requested.

Throughout the rooms, historic paintings and upholstered French-style furniture in vibrant colors together with the heavy brocade curtains and huge tassels dominate the scene. Enhanced by soft pastel silk wallpaper, glitzy chandeliers, gold-plated mirrors,  they create a mesmerizing concoction of pure luxury.

What To Expect From A Classic Room 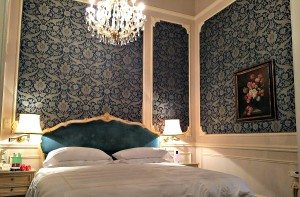 Hotel Imperial Vienna. If you had grown up in Vienna, my room would have made you feel equally nostalgic. More than anything, it brought back those Austrian soap operas from the 1940s: Where on Saturday afternoon Empress Maria Theresia would ponder about the Empire’s fate. When Empress Sissi would indulge in candied violets and the Congress of Vienna waltzed away.

Since Viennese feel nostalgic at the Imperial it’s because this site displays an authentic setting: the blue silk wall paper, the rich stucco ceilings, the upholstered Empire-style chairs, the romantic flower paintings…

As a 5-star hotel would require, my bed was immaculate. In fact, elegance is often uncomfortable, though that was not the case. Where on earth do I get such a heavenly mattress that is neither too soft nor too hard? Besides an exquisite bed great connectivity contributes as much to a delightful stay. Unlike with some other luxury places, Wifi was not only free throughout the hotel but worked seamlessly. In the marble bathroom the heated floor felt magic.

How Much Does It Cost To Stay At Hotel Imperial?

Depending on the season and special offers a classic room costs from EUR 341 per night.

What Are The Check-In and Check-Out Times at Hotel Imperial? 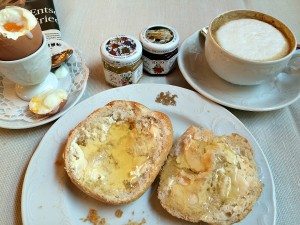 Hotel Imperial Vienna. The hotel lets you choose between a continental breakfast, full American breakfast, a breakfast buffet and a grab’n go breakfast. Because I was keen on Wiener Frühstück (Viennese breakfast) I chose the continental option.

As with a luxury Viennese hotel it is only as good as its bread and cake selection. From the first serving it was clear that Imperial was serious about bread and cakes.  However, it wasn’t so much the impressive amount of fresh viennoiseries and cakes. Moreover, two very distinct features won the morning: the handmade irregular rolls (Kaisersemmeln) and a wonderful traditional nut strudel that I last had at my late Viennese grandmother’s. In the photo you can see part II of my breakfast: Kaisersemmeln with honey, a soft egg, Staud’s jams, and a melange. 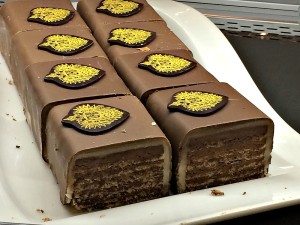 The Imperial includes a traditional café and restaurant, serving classical Viennese cuisine. Most importantly for cake connoisseurs, the Imperial Torteis the secret queen of Viennese cakes for many locals:

A square shaped multi-layered chocolate cake wearing a thin coat of marzipane and chocolate which is decorated with an embleme of the Imperial Eagle. I tried it long ago and made it my favourite Viennese cake. Since 2018, the Torte comes in three variations: classic (with almonds), black orange and fine raspberry. By the way, you can also buy it online here. 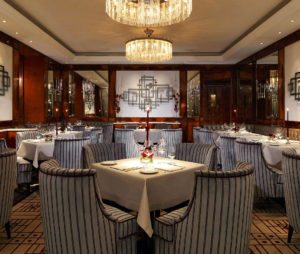 Like other luxury hotels the Imperial boasts its own fine dining space. However, you can safely expect a level up on haute cuisine. Why? Because OPUS is a place where its chef arranges dinners and receptions for the Austrian president, famous maestri and artists. As for the type of cuisine prepare for eclectic food with a sometimes Austrian twist.

Other Things To Know About Hotel Imperial

In 1867, the German Duke of Württemberg needed a home on Ringstrasse and built a town palace. At the occasion of the World Exposition 1873 the palace converted into Hotel Imperial. Why? Because the Duke and his wife did not feel comfortable there – hard to believe.

At the end of World War II, the Russian Allies used the Hotel Imperial Vienna as their headquarters. Whereas the British used Hotel Sacher.

Note: I was invited by Hotel Imperial. All opinions expressed and English language mistakes made are my own.

Search For More Hotels In Vienna 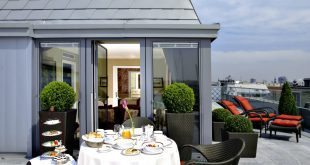 Hotels Vienna Austria 2023: Where I Would Stay If I Was A Tourist

Hotels Vienna Austria. Where to stay in Vienna, which are the best places to stay …