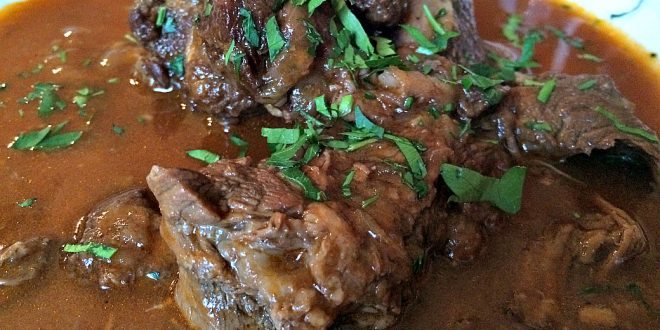 The classic Gulash is a tasty beef stew of Hungarian origin. It is one of the greatest imports to Viennese cuisine. Before I share my favourite Gulash recipe with you, here is a starter.

Gulash derives its taste from red sweet pepper, sour cream, onions, cumin and marjoram. The hearty red coloured stew is referred to as Pörkölt or Paprikás in Hungary. The contemporary Hungarian form is a more liquid, soup-like stew, which we Austrians in turn call Gulaschsuppe.

Gulash crosses social and cultural levels in Austria: Originally it was the food of poor people. You can find it in traditional Austrian and Viennese taverns such as Zu den Drei Hackenor Silberwirt, in many Vienna coffeehouses, and in refined restaurants. At many of the most elegant Vienna balls, the hearty stew is served at midnight to fuel ball dancers with energy. For the same reasons, it is equally popular at Austrian ski resorts.

In Austria, the Gulash is most popular in Vienna, and the Austrian regions bordering with Hungary: Lower Austria and the Burgenland.

Where Does Gulash Come From? 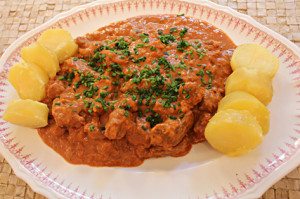 The stew has its origins with the Hungarian shepherds and later symbolised Hungarian culture and sovereignty in the Austro-Hungarian Empire. At the start of the 19th century, the Hungarian Infantry was established in Vienna and created the Austrian variation of Pörkölt: Gulash.

In the First and Second World Wars, the stew was a popular meal with the military, as it was easy to prepare, could also be cooked with meat of lesser quality, and provided high energy to the troops, especially when combined with pulses. The mobile kitchen trailer used by the military, invented in Germany at the end of the 19th century, was soon called Gulaschkanone.

What makes a good gulash is the right type of meat and the right consistency of the gravy.

Beef: foreshank, heel of shoulder, shank without bone, or silverside heel. The shanks are aromatic and rich in sinews which turn into gelatine when the meat is gently simmered. The gelatine binds the gravy and reduces the need to add flour. However, this kind of meat will require 1.5 to 2 hours of simmering to get tender. Alternatively you can take
Pork: neck, shoulder, foreshank, leg, hip, cheek. The pork takes much less time to cook.

The classic beef gulash can be modified by adding different sides. Each of these dishes have their own name:

Instead of beef and pork  use potatoes, beans, chanterelles to prepare a vegetarian Gulash. The original method of preparation and spices largely remain the same. The modern Viennese cuisine also knows a pumpkin variation (Café Drechsler, for example, used to serve a lovely one!).

Here is my favourite recipe for potato gulash.