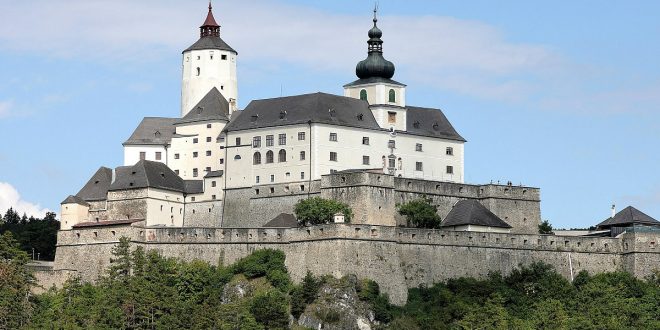 Forchtenstein Castle – Why Visit And What To Expect 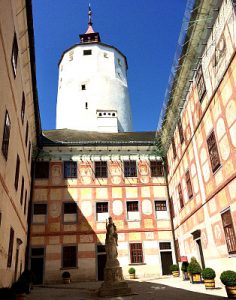 Set in Austria’s hilly Burgenland, Forchtenstein Castle vividly connects visitors with 600 years of history and a world-class art collection. Across the 14th-century Austrian castle, the Hungarian Esterhazy princes tell their story of the 30-Year-War, the Ottomans, and Napoleon. And because it’s only an hour’s drive from Wien it makes a great day tour from Vienna.

For military buffs, Forchtenstein’s historic armory – one of the largest private collections of its kind in Europe –  justifies a visit in itself. For the rest of us, seeing the most comical original ancestors’ gallery makes this castle visit wondrous, as does a collection of hilarious curiosities. Have I mentioned the stunning baroque interiors and silver furniture?

What To See At Forchtenstein Castle

Driving through the rolling hills of Burgenland‘s Rosalia mountains you see Burg Forchtenstein long before you stop there. Perched on a steep dolomite rock about 500 meters above sea level the fortress poses a mighty reason for visiting Burgenland. Mostly because of thousands of precious objects and a painstaking restoration, Forchtenstein ranks among the best Austrian castles. 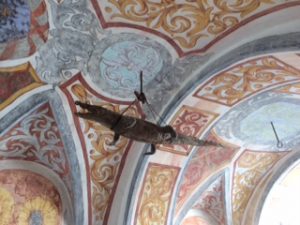 At first, the entrance gate decorated with the Esterhazy’s coat of arms truly stands out, but is soon dwarfed by a crocodile. Hovering above vistors’ heads in the entrance hall, the ‘monster’ from nearby Lake Neusiedl (Neusiedlersee) used to scare off intruders such as the Ottoman troops. With considerable success. In fact, Forchtenstein Castle was never captured. As you progress through the castle, the Esterhazy princes’ love of faking it becomes even more obvious. 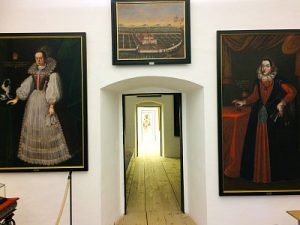 In the permanent exhibition ‘Heroes – Treasures – Loot’, for example, a few faces in the ancestors gallery seem a bit far from reality: Sure enough, a handful of 16th/17th century caricaturists realized their full potential there. Since the painters needed to fill gaps in the Esterhazy’s ancestral lines they simply used their imagination.

And thanks the Esterhazy’s beefing up their official pedigree with celebrities, you can admire paintings such as the one of Prince Vlad Tepes II, aka author Bram Stoker’s Count Dracula, and of Charlemagne.

In between Forchtenstein castle’s intriguing portraits, quite unusual glitzy interiors show off silver-plated chairs, chandeliers, clocks and tables. In fact, they constitute one of Europe’s finest collection of silver furniture, and had even been on temporary display at Versailles. 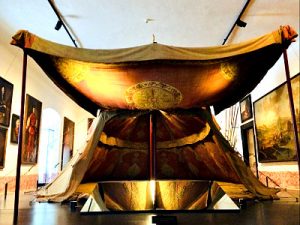 That same exhibition also showcases a magnificent Ottoman tent occupying almost an entire hall. Along with Ottoman bows, arrows and quivers as well as precious bridles, the objects draw you into the conflict with the Ottomans that troubled the region for centuries. Reportedly, prince Nikolaus Esterhazy collected them after he and his sons Ladislaus and Paul had triumphed over the Turkish troops in 1624, partly as a loot and partly as a diplomatic exchange. (Fyi, the legend around the Esterhazy Keller tavern in Vienna relates to the Turkish siege in 1683.) 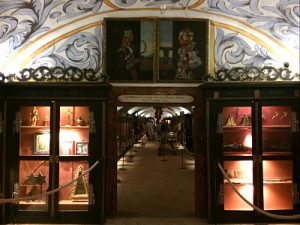 A few steps lead you down to the Esterhazy princes’ famous ‘safe’: In the cabinet of curiosities Forchtenstein castle doesn’t just display the most delicate ivory carvings and intricate musical clocks. Actually, it’s once again the art of making and faking in the 17th and 18th centuries that lets jaws drop: Obsessed with conquering the wonders of the natural world, the family faked more monsters.

Most prominently, an enormous ‘dragon’ made of hundreds of stuffed animals and animal bones dangles from the ceiling of the main treasure chamber. Why? To throw the most frightening shadow to intruders holding their candles, the ‘dragon’ was positioned strategically to protect the art treasures around it.

In between valuable clocks and religious objects visitors discover the horn of a unicorn, and a mini dragon, aka taxidermied marten with wings.

Advancing through the bakery and kitchen further down, a gigantic weapons chamber reveals neat rows of flintlock muskets, fuses, pikes and helberds. To be specific, the weapons collection goes back to objects from the 30-Years-War 1618 to 1648, and also features pieces from the Napoleonic Wars.

Quite exceptionally for a tourism spot restaurant, the Grenadier presents fine contemporary interiors in sleek wood and raw stone. As polished as its setting is its cuisine, focusing on Austrian and regional dishes, from Wiener Schnitzel to regional fish specialities and at least one vegetarian dish.

The wine list includes white, red and dessert wines from the local Esterhazy wine estate in Trausdorf. On top, there are no other culinary distractions in the area which make Burg Forchtenstein’s restaurant more than just a practical choice. 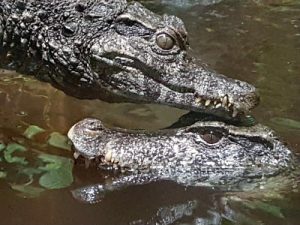 At two minutes walk from Forchtenstein castle, the reptiles zoo adds a nice round up to a day tour from Vienna for families. Expect a variety of pythons, cobras, caimans, turtles and other amphibians. On weekends, you can watch the caimans, snakes and lizards being fed, and are allowed to stroke them. Since the feeds are the most popular highlight consider visiting on weekends.

NOTE: As of June 2020, public feeds and stroking the animals is not yet allowed due to Covid-19 security measures. 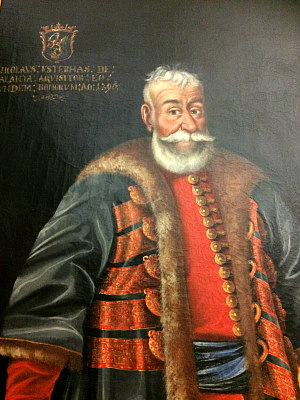 Regular opening hours of Forchtenstein Castle: Monday to Sunday 10.00 am to 5.00 pm

At present, Forchtenstein castle offers tours in German and Hungarian language. If you’d like to book a private day tour from Vienna, an English speaking guide can accompany and guide you through the castle (email me at barbara.cacao(at)vienna-unwrapped.com).

How To Get To Forchtenstein Castle from Vienna 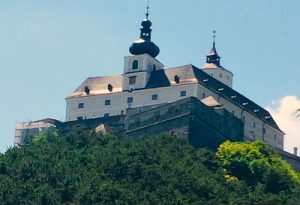 By car, drive for about one hour from Vienna via highways A23 and A3 towards Burgenland and then Mattersburg. Take exit Forchtenstein from Burgenland Schnellstrasse.

By public transport, take the Railjet train from Vienna Central Station to Graz, and change in Wiener Neustadt to the train to Sopron. Alight at Mattersburg and take a taxi for the 12 min drive to Forchtenstein Castle.

Private day tour from Vienna to Burgenland with car (Mercedes E Class) and English driver, including a visit to Forchtenstein Castle, wineries and Lake Neusiedl: from EUR 490 (email me at barbara.cacao(at)vienna-unwrapped.com for further details).

go back to Vienna Unwrapped homepage