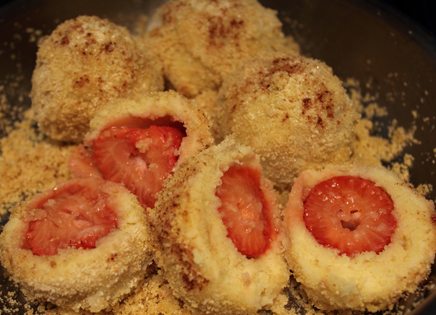 Dumpling recipes. Since Austrian knödel are my favorite mood food my collection of sweet and savory dumpling recipes has grown during the past years. When I dig into them, I bite into my home country. To show you how versatile and easy they are to prepare, learn how to cook eight different types dumpling types below.

What Are Austrian Knödel Made Of?

Throughout Austrian cookbooks, Knödel (or Knodel) appear in many recipes, either as a stand-alone meal or a side dish with meat, mushrooms or just lettuce. Depending on their variety, they are made or potatoes, bread and bread crumbs, soft cheese and semolina, and even yeast.

Where Do Knödel Come From?

Most of the dumplings originate from the former crownlands of the Austro-Hungarian Empire, Bohemia and Moravia (today’s Czech Republic), and from Germany. Originally, the many Bohemian and Moravian cooks and nannies who used to work in bourgeois Viennese households introduced the Knedlicki to Austrian households.

The eight dumpling recipes below are based on 4 people and focus on either savory or sweet dumplings. While most of them are easy to prepare Austrian supermarkets also offer ready made mixtures for all the different Knödel. 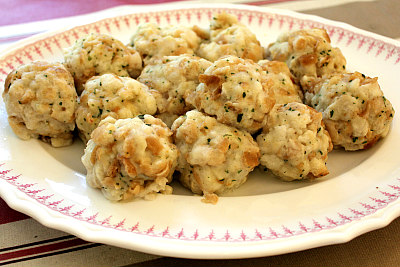 Soft but solid in texture, this dumplings recipe is based on old bread rolls. It derives its taste from chopped onions and parsley. We usually eat them with roast pork (Schweinsbraten), gulash, deer stew, lentils or mushroom ragout. If you mix finely chopped smoked meat into the mass, you will get Tirolerknödel, a tasty stand-alone dish.

My tip: Boil one test dumpling to find out whether additional flour is needed for the remaining mixture.

Serviettenknödel is one of the German dumpling recipes and similar to Semmelknödel. They are shaped into a long roll and boiled using a cotton or linen napkin (Serviette). Today, people also use strong cling film which can be cut open after boiling. The Knodel are used as a side dish much like the Semmelknödel. 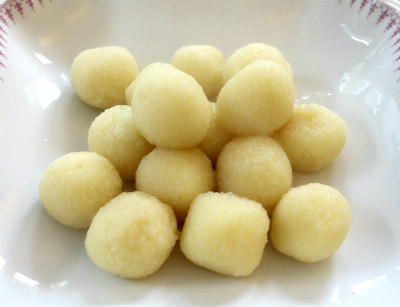 This dumplings recipe is one of the easiest for potato dumplings, which taste a little like Italian gnocchi. Potato dumpling recipes are heavier in texture than bread or soft cheese dumplings. They are a great side dish with roast duck or goose, but also with roast pork.

The bacon dumplings recipe from the Tyrol is another meaty version of dumpling recipes. They mix old rolls with finely chopped smoked bacon, onions and parsley, which creates a fantastic flavour. The Tiroler Speckknödel are eaten as a solid ingredient with clear soups (use small dumplings). They can be sliced and pan-fried and eaten with leafy green salad, white sour cabbage or lentils.

My tip: Fry slices of left over dumplings in the pan. Tastes also great if you fry them with eggs. Serve with green leafy salad. 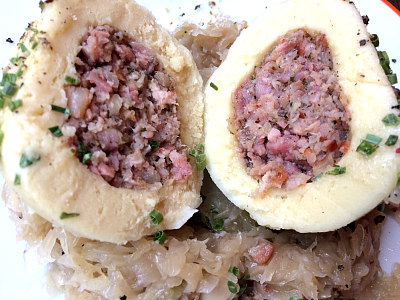 For a stand-alone dumpling dish this is one of the best recycling dumpling recipes if you have left over roast meat, minced meat or sausages. 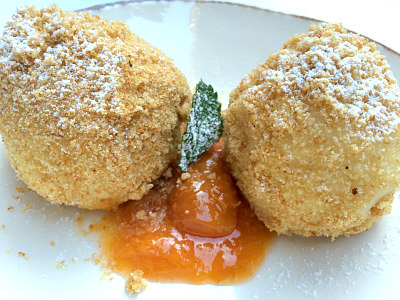 Our classic sweet dumpling recipes are based on potatoes or soft cheese, flour and sugar. Soft cheese dumplings are very fluffy. Whether you have them plain, with compote, breadcrumbs fried in butter and cinnamon, they taste amazing. Alternatively, fill them with different types of fruit, such as apricots, plums or strawberries. Other than that, this kind of Austrian knödel is also delicious when frozen: For example, Viennese ice cream parlour Eissalon am Schwedenplatz excels with its apricot ice cream dumplings.

One of my mother’s favourite sweet dumpling recipes, this has become a regular on my family’s dinner table.

My tip: As a variation of fruit dumpling recipes, you can replace the apricots with nougat balls (for best results use Lindt’s Lindor nougat balls), which melt into chocolate sauce once you slice up the dumplings. Vienna restaurant Motto usually serves them with warm strawberry compote! Alternatively, you can create this type of Austrian knödel as golf-ball sized unfilled dumplings and serve them with fruit compote. 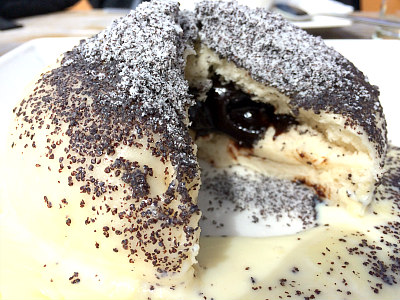 Yeast dumplings are the Big Mac among Austrian knödel. They are rich and filling ‘reward food’ and their gigantic size inspires awe. Germknödel come tossed with a black and white mixture of poppy seeds and caster sugar, and are surrounded by a mellow puddle of melted butter, or vanilla sauce. They are filled with Powidl, traditional plum jam of Bohemian origin. Yeast dumplings are high carbohydrate food and very popular at Austrian ski resorts.

Yeast dumpling recipes are for experienced cooks. It also shows that this knodel is slow food. It takes around 2 to 2.5 hours to prepare them (think of the reward!)