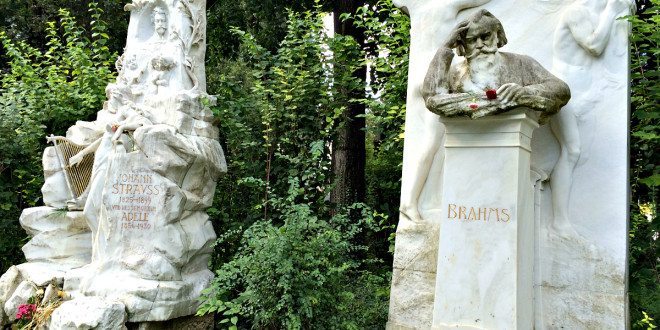 Central Cemetery Vienna. It sounds weird but nowhere else does Viennese history become so alive than at Wiener Zentralfriedhof. During a guided tour through the cemetery we traced celebrity musicians’ graves like those of Beethoven, Strauss, Schubert, Falco, and of other famous Viennese.

What To Expect At Zentralfriedhof 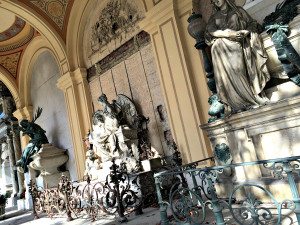 On a sunny August day, tour guide Gertrude had offered to take me round the 140-year old compound. It was a sunny late summer day with soft light and a warm breeze.

Historically, Zentralfriedhof was established during Vienna’s rapid urban growth in the second half of the 19th century. With almost three million buried, the 2.5 square kilometre (one square mile) big Zentralfriedhof is the second largest in Europe.

In fact, you can even tour the compound by bus and horse carriage. If you have seen Carol Reed’s The Third Man (with Orson Welles) you will remember that endless road lined by graves that Harry Lime’s girlfriend walks along. It was filmed at Zentralfriedhof.

Close to the cemetery’s entrance, the romantic arcades houses the most finely sculpted tombs (see photo) – the sort you’d expect in a top museum. Later on we discovered that the tombs in the wider interior were no different, just more varied.

To provide some focus, we decided on international celebrities. Not to say that we could have focused on other topics with equally rich results.

Musician’s Graves At The Central Cemetery 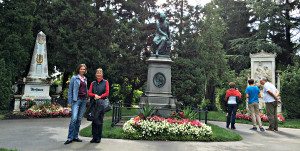 Central Cemetery Vienna. Ludwig van Beethoven and romantic composer Franz Schubert rest along a beautiful rondeau with Wolfgang Amadeus Mozart’s memorial in the middle. (Mozart is buried at St. Marx cemetery but no one knows exactly where.) Visiting their graves is nothing like visiting their residences. It was much more personal. Their tombstones reflected spot on what they stood for: While Beethoven was classicistic, Johann Strauss and operetta composer Carl Millöcker were wild romantics. Clearly judging from his tombstone, Arnold Schönberg must have been a radical symmetrist.

“Many of these celebrity graves were arranged by date, and sometimes by personal acquaintance”, explained Gertrude. “Johann Strauss and Johannes Brahms knew each other well, for example, and are now located next to each other.” As we passed from one to the other the burial sites became intricate hooks in a social history of Vienna. 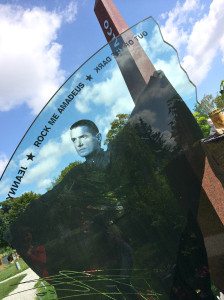 Central Cemetery Vienna. With several hundred celebrities resting at Zentralfriedhof, you will be surprised who you will find.

Other than classical musicians the cemetery unites scientists, pioneers and explorers from across Europe. There at Zentralfriedhof, Vienna’s former status as a world centre of arts, science and medicine again turned obvious. Art Nouveau genius Josef Hoffmann shares the space with the likes of Alois Negrelli, who engineered the Suez Canal, Alfred Adler, founder of the school of individual psychology, satirist Karl Kraus, Antonio Salieri and pop musician Falco.

The likes of Ludwig Bösendorfer (the piano maker) and the Thonet family (the Vienna coffeehouse chair makers) may not rank among your favourites. However, at Zentralfriedhof they recreate that social and cultural fabric that made Vienna so famous. 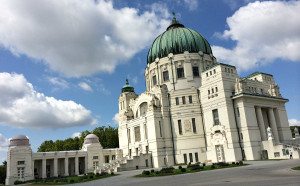 Central Cemetery Vienna. By the time the new Zentralfriedhof was ready to receive a decent infrastructure around 1905, the Art Nouveau era was in full bloom. You notice that right at the main entrance. The most splendid Jugendstil building there is the cemetery church of St. Charles Borromeo in the middle of the compound. It was designed by Art Nouveau architect Max von Hegele.

Although not a strict must, visiting the church is an experience on its own. Without exaggerating, its simple elegance and light colours are breathtakingly beautiful. During a guided tour, you will hear stories of the building and explore bizarre details (spot Vienna’s mayor in the altar fresco?) that will make you enjoy it even more. 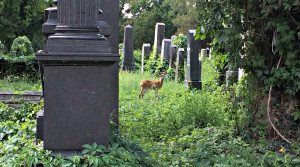 After the tour was over at the main section I decided to visit the Jewish Cemetery on my own, using entrance no. 1. This part is almost of the same age as the main cemetery but looks a 100 years older. Most of the tombs and burial vaults were abandoned. Hence I kept stumbling through high grass along thick ivy curtains and wild bushes. Suddenly, a deer hopped between the rows of graves with hebrew letters and pebbles on them! 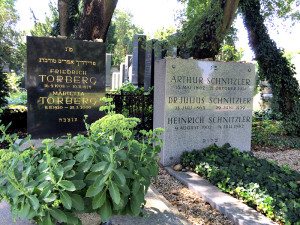 Jewish Vienna was thriving before the Holocaust. Nowhere else, however, does it become as obvious as at this cemetery. The sheer elegance and size of this place, which had grown too small by 1916, speak volumes. Famous citizens occupied the more manicured part close to the entrance. among them writers Friedrich Torberg and Arthur Schnitzler, or psychiatrist and concentration camp survivor Viktor Frankl.

Find out more about regular small group tours to Zentralfriedhof.

How To Buy A Grave At Zentralfriedhof 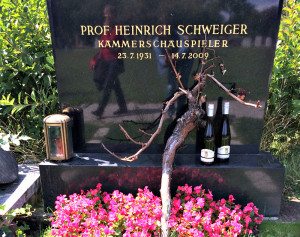 It is not cheap to be dead at Zentralfriedhof. Here is a guide to rental space at the cemetery:

Many Viennese retain a curious habit of caring for their departed loved ones. Hence, it is not uncommon to find objects on the grave that relate to the dead’s former passions or what they were known for. For example, popular Austrian actor Heinrich Schweiger, for example, loved wine, as you can see on the photo above.

How To Get To Vienna Central Cemetery

To get to Vienna’s Central Cemetery’s main entrance, either take tramway 11 or 71 (from Ringstrasse boulevard) to Zentralfriedhof 2. Tor. To visit the Old Jewish Cemetery alight one stop earlier at Zentralfriedhof 1. Tor.