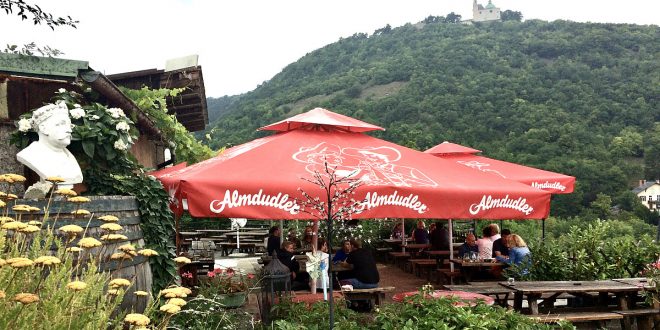 Best Place To Live: Why Vienna Is (Not Quite) The Best City In The World

Why is Vienna the best place to live? Because Vienna continuously occupies the top ranks of several world cities rankings it is often rated the best city in the world. This is mainly due to its high safety record, its modern and seamless public transport system, and environmental factors such as low pollution and lots of green space. Other than that, Vienna’s public healthcare and housing are one of the best in Europe. In terms of social equality, Wien welcomes different cultures and religions, and has a vibrant LGBT community. As many travellers will know Austria’s capital overwhelms with its cultural offer.

For the past 10 years, Vienna has been ranking among the most livable cities in the top 8 places of these five respected annual city rankings, with some consistent no.1 rankings throughout.

To understand exactly why Vienna is the best city in the world and the best place to live, explore its 7 key success factors in detail. If you visit Vienna why not do your own research? Just copy my practical test tips for each factor. 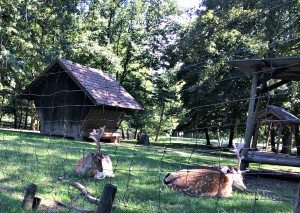 Since 2010, the Viennese Social Democrats govern in coalition with the Green Party. As a consequence, Vienna has relentlessly focussed on clean green space, water and air, little noise, environmentally-friendly energy and no messing with waste. In a European pollution index, Vienna comes out  as 11th least polluted city among 336 cities worldwide (July 2020, source: numbeo.com). [I think it could do even better, and it likely will in the next couple of years.]

In line with significantly reducing the car share of trips, the Viennese government actively promotes walking.  To reward walking, cycling or using public transport, Vienna is testing the world’s first ‘Culture Token’ app: In return for ‘green mobility’, Viennese residents receive a virtual token that they can exchange for tickets to renowned cultural institutions. (NOTE: The app test phase will continue as soon as Corona virus related restrictions on mobility have been lifted.)

Vienna is also one of the world cities closest to sustainable waste management. We take recycling and composting seriously. District heating through thermal recycling is a growing trend.

Clearly, Wien’s green space represents the most visible environmental asset – more than half of Vienna constitutes green space. As soon as  the sun comes out, we love to hang out in parks and gardens. For the records, the biggest green space in the city is Lainzer Tiergarten (Lainz Nature Reserve, see picture) where Hermesvilla is based.

Finally, Vienna is the only world city with a notable wine growing industry. Since it cultivates its own vineyards, you can visit wineries without leaving Vienna. 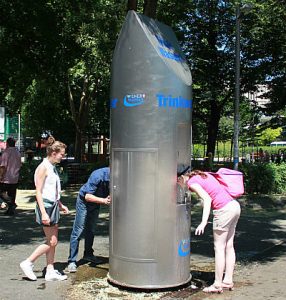 Another much appreciated factor is the quality of Vienna’s tap water. In fact, residents get fresh mountain spring water, arriving from Hochschwab mountains in the Vienna Alps through Vienna’s Mountain Spring Pipeline directly to their bathrooms and kitchens. Whether locals or visitors, everyone moving around in Vienna has access to 1,000 public drinking water fountains. Between April and September, the number increases by another 50 mobile drinking water fountains across the city. Should the temperatures rise above 30 degrees Celsius, Vienna’s 100 spray mist showers in town cool passers by with the click of a button.

Test tips: First, choose a truly green Hotel such as award winning Boutique Hotel Stadthalle. Not just does it run its own beehive on a lavender rooftop and serve organic breakfast: Hotel Stadthalle is the first city hotel with a zero energy balance. By using photovoltaics and solar energy, and by doing without energy-guzzling appliances, the hotel produces as much energy per year as it consumes.  Second, go on a Prater biking tour or borrow a City Bike. Third, take an hour to hike through the Vienna Woods and vineyards of Neustift and Grinzing. make sure you picnic on a permitted area – not all park lawns can be used for picnics. 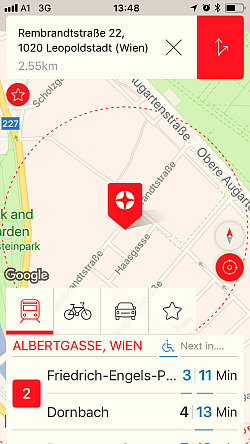 Having one of the densest, most reliable and modern public transport systems in the world makes a city like Vienna the best place to live: You can whizz through Vienna on 143 lines, getting on and at more than 5,000 public transport stops (not bad for an area totalling just 415 square kilometres) with five metro lines, 29 tramway lines, and 90 bus lines. Wherever in town, you are almost never further than 5 minutes from a tramway, train, metro or bus station. Many of them indicate imminent arrivals and work seamlessly. Most tramways run with good frequency between 5am and midnight.

On top, ticket fares are comparably cheap. For example, a 24-hour ticket including use of all public transport costs EUR 8 (as per July 2020). Free apps such as Wien Mobil (photo) help residents move around town by public transport, bike or car.

On a strategic level, Vienna runs its own Smart City Agency, which develops and implements an ambitious e-Mobility concept, connecting state-of-the-art mobility and environmental solutions. Even Vienna’s city bike scheme is now part of the local transport authority.

Test tips: First, get a Vienna Card or buy a 1 to 3 day transport pass. Second, take CAT airport train from and to Vienna International Airport or hire a green taxi.

In many respects, Austria has been safer than other European metropolises: It is a fairly safe haven, far from political, social and economic turmoils. In Austria and Vienna, we earn good salaries, keep a relatively low crime rate, and we hate strikes. If we demonstrate, it’s mostly peaceful. As for crime statistics, Vienna ranks on 21st place of 137 European cities of all sizes (July 2020, source: numbeo.com). In the past 10 years, Vienna’s crime rate has decreased by 16.5% to 174,000 crimes (source: Bundeskriminalamt, July 2020; crime statistics 2019).

Test tips: Don’t worry about transport strikes – they are VERY rare. Feel free to explore Vienna by night, especially the city center, and keep an eye on your hand bag and valuables as you would usually do.

At the start of the 20th century Vienna was built to house two million inhabitants. Many inner city buildings were elegant town houses with spacious rooms and high ceilings. The number of inhabitants was reduced massively through two consecutive world wars. Today, we have around 1,8 million inhabitants. Over the next years, Vienna will create 45,000 new apartments. This is expected to keep a tab on real estate prices. The property price-to-income ratio in Vienna has been 13.72, putting it in 29th place of the European Property Prices Index out of 173 cities (2020, source: numbeo).

Test tips: To feel the traditional ‘grand space’, book a hotel or apartment located in a historic townhouse. Go for a B&B or private apartment in a residential neighbourhood to get a feel for local housing and living.

In a ranking of the Best Healthcare Systems Around The World (2019, by ID Medical), Austria ranks in proud 4th place. My local family and I have stayed at a few Vienna hospitals and they were all professionally run, clean and accessible. Since I moved away, I have found I’m not the only traveller/expat who does regular health checks when in Vienna. Our public health system is excellent, according to WHO and OECD, robust and doctors top class. Accessing great medical care in Vienna is still easier than in many European cities. Most specialists have their own practices outside the hospitals and take direct (private) appointments, or appointments by referrals through local GP’s.

Test tips: Search for a Vienna doctor to arrange a health check while you are in town.

6. Best Place To Live For Culture 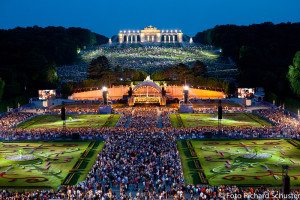 Going out to have fun and join top cultural events makes a difference to your life. On average, Vienna stages seven large events per day. It’s fairly normal for a Vienna middle class family to have an annual concert, opera or theatre subscription, dressing up for several of our 450 annual balls, or go to a bar, nightclub or open air event. (I’m not even speaking of tourist magnets Vienna Boys Choir, Spanish Riding School, and the Vienna Philharmonic Orchestra.) An opera premiere review is covered with almost the same importance in the prime evening news as a natural disaster.

Test tips: Check a classical concerts calendar for Vienna, and venues such as Musikverein, Konzerthaus and the Vienna State Opera.

Because the best place to live would not qualify without social inclusion, a city like Vienna has to score in this area, too. On a broader level, Vienna’s top city ranking for ‘prosperity and inclusion’ (PICSA Award 2019) shows that Austria’s capital generates prosperity on a socially inclusive level, allowing a maximum number of residents to participate in it. As a matter of fact, Vienna pursues its own Charter to promote ‘good neighbourly relations’ between all citizens. This includes respect and tolerance towards different religions, world views, and same-sex relationships. You can generally kiss and hold hands with your partner in public – whether you are hetero, gay or lesbian – without fear of being hassled.

Test tips: Get to know local Viennese and hear their world views during a taxi ride, or visit an LGBT event;

Where Vienna Needs To Improve

For years, many media and public administration experts have stated that Vienna needs to improve in two major areas to maintain its top positions as the best place to live.

Ever tried to shop for groceries, fashion, computers or books on a Sunday in Vienna? In general, it is illegal for shops to open on a Sunday. According to the Retail Opening Hours Act from 2008, however, you should be able to grab souvenirs and sweets, and buy fresh flowers from a stand, or go shopping at the airport or train station. As Monocle Magazine never tires to point out, Vienna won’t cut it as best place to live in the long term if it doesn’t liberalise its retail shopping hours.