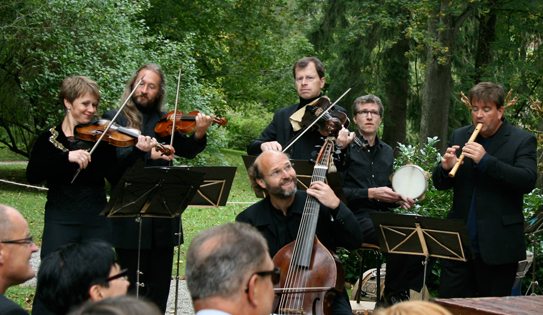 There is something utterly intriguing about baroque classical music: the way pompous sounds align with simple tunes; the way every melody adopts a distinct personality, and the way baroque instruments create that other-worldly spirit. Learn about the best of the baroque music in Austria, and the best concert venues in Vienna.

The baroque music era in Austria and the former Habsburg Empire covers the early 17th to the mid 18th century. The baroque period in Vienna mirrors that music: I find monumental town palaces, lavish churches, broderie flower beds and rich cream cakes in many baroque tunes.

The local baroque classical music is warm and vibrant. And it has a distinct ethno-sound! Some of the worldly baroque music even includes dance rhythms and Austrian alpine music. The crownlands of the Habsburg Empire, especially Hungary and the Slavic regions, added elements of their rhythmic folk music to many baroque music pieces. Still, baroque classical music from Austria is profoundly court music. It was mostly composed on commission of the conservative Habsburg Emperors. Emperor Leopold I was an avid baroque composer.

Where To Enjoy Baroque Classical Music In Vienna

There are regular chamber music events taking place at various venues in Vienna: Lone trumpets arguing with cliques of strings, an organ uncorking its pipes of sparkling music, baroque recorders creating twitter streams. The Theater an der Wien, one of Vienna’s four opera houses, has established itself as the centre of excellence for baroque opera.
Find out more about chamber music events in Vienna;
Search for baroque opera performances in Vienna;

The Habsburg Emperors, from Emperor Leopold I to Empress Maria Theresia, loved the pomp and glory of baroque operas: The mostly Italian and French operas at the time required an army of actors and dancers, luxurious baroque costumes, and elaborate stage settings. The most famous composers at the Habsburg Court were court bandmasters Antonio Cesti (‘Il pomo d’oro’, 1667) and Heinrich Ignaz Franz Biber.
The Theater an der Wien, Vienna’s centre of excellence for baroque operas, regularly stages baroque operas in concerto. Learn more about baroque operas playing in Vienna.

, such as La Margarita, and Balletto A Cavallo. The latter, a pompous equestrian ballet for 600 horses and 100 musicians, was composed on occasion of the wedding of the Spanish Infanta Margarita Teresa (remember the little princess portrayed by Velazquez?) to Emperor Leopold I.

Benedikt Aufschnaiter was a composer of sacred music. Born in the Tyrol, he worked at a respectable band in Vienna before becoming bandmaster at the court of Passau. He is sometimes referred to as a still underrated baroque composer because of his technically perfect and typically opulent baroque music. A definite insider tip of baroque classical music. Best works: Dulcis Fidium Harmonia, opus 4; serenades

Friedemann Katt (his artist’s name is Franz Xaver Frenzel) refers to himself as the only living baroque composer. He was born to a composer father just after the Second World War. Frenzel played the organ at Heiligenkreuz Abbey in the Vienna Woods and was a musical teacher. He has produced dozens of baroque symphonies, sonatas, string quartets, preludias, sacred music, and an opera (Merlin). Listening to his baroque classiccal music reminds me of contemporary baroque theatre costumes: They are clearly old style, but the material and making is fresh and new. Best works: Symphonic Fantasies; Fantasy for string orchestra;