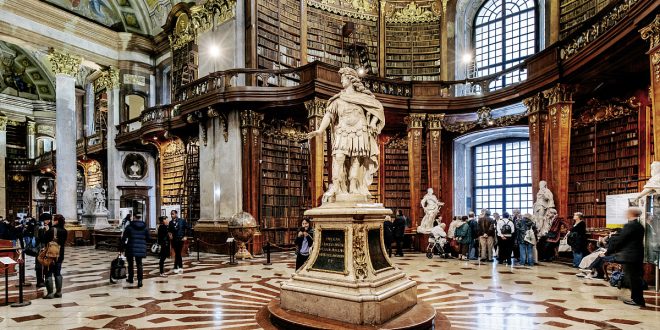 Austrian National Library: What To See At Vienna’s Nationalbibliothek

With more than 12 million books, is the Austrian National Library just one of the Imperial Palace’s 2,600 rooms you can skip? Should you pony up EUR 8 for visiting a potential tourist trap? I have been there. Here is my review along with some background. 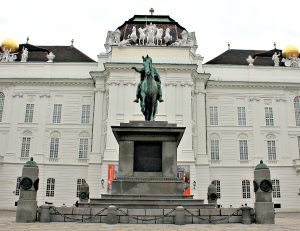 The institution of the Austrian National Library dates back almost 450 years to 1575. At that time, the first official court librarian of the Habsburg Empire started his work. Around 300 years ago (1723 to 1726) Emperor Charles VI (father of Empress Maria Theresia) had the beautiful baroque building constructed as part of the Imperial Palace (Hofburg). Bottom line, the Habsburgs wanted to impress with a knowledge powerhouse. The Austrian National Library was built by the same architect who had built Schonbrunn Palace: Johann Bernhard Fischer von Erlach.
There are other museums which form part of the Austrian National Library, such as the Papyrus Museum, the Globe Museum and the Esperanto Museum.
In fact, the library’s oldest book is the medieval clerical scripture ‘Evangeliar of Johannes of Troppau’, from 1368. It is full of coloured drawings and beautiful hand writing.

Where Is The Austrian National Library?

As part of Vienna’s Imperial Palace, the Austrian National Library resides at the Hofburg. While you can access the historic State Rooms from Josefsplatz, the reading room is located at Neue Burg on nearby Heldenplatz. The National Library’s other affiliated museums are in different adjacent buildings. 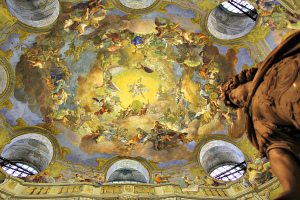 If you do one thing at the library, visit the baroque State Hall. My first thought when I arrived there was: How could anyone dig into a book in these surroundings?

The scenery is breath taking: I stand in the middle of a cathedral-like oval dome carried by massive marble columns and covered by magnificent frescoes. The carved wooden galleries left and right are filled with 200,000 precious leather bound books over two storeys. Wooden stair cases on wheels next to the galleries criss cross the book walls. I’m joined by a few historic personalities sculpted in fine marble, and by a handful of 400-year old globes.

You are not allowed to snoop into the books, but you can see a few on display in wooden show cabinets. When you stand in the middle of the dome, watch out for the Eugeniana. The precious collection of thousands of books was once stored in Prince Eugene of Savoy’s winter palace. They form the library’s core stock.

The State Hall and entrance of the Austrian National Library are right next door to the Imperial Palace Vienna (Hofburg).

Tickets for the State Hall are quite expensive (EUR 8) though, and are not part of Hofburg combination tickets. The upside: You can take photos (without flash, though) of the gorgeous interiors at your heart’s content.

The Austrian National Library hosts a series of collections of mostly Austrian orgin, such as the Image Archive and Graphic Collection, the Collection of Historic Maps and the Literature Archive. The Image Archive, for example, includes loads of fine portraits and images of the Habsburgs, historic photography of Vienna after World War II, and historic Austrian billboards from 1900 onwards.

To research the collections, you need a library card, so unless you are really keen it’s easier to visit the National Gallery at the Belvedere Vienna.

Is It A Tourist Trap? 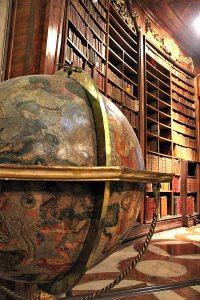 The Austrian National Library is one of the most beautiful historic libraries in the world. But it does not only attract tourists. The library is a ‘living’ local institution.

School children explore all sorts of knowledge in the library. Students and scientists of history, law, literature, geography, music, and art do their research in the library and in special collections. Travellers tour the baroque State Hall; culture fans visit themed exhibitions, and the library’s Literature Salon and Music Salon events; and national and international corporations invite their guests to dine where monks once studied in the Augustinian reading room.

Personally, I can’t wait to get my hands into Austrian Books Online. Hopefully sooner rather than later, the Austrian National Library will have finished digitising 600,000 books (many of them historic) as part of a project with Google. They will be available online for free.

My tip: Watch out for the temporary exhibitions about milestones of Austrian history, they are high quality. If you are keen to explore little known exhibits and historic Austrian documents, dip into some of the permanent collections.

go to Vienna Sightseeing Top 10, And Four Extra Tips
visit What To Do In Vienna
back to Vienna Unwrapped homepage