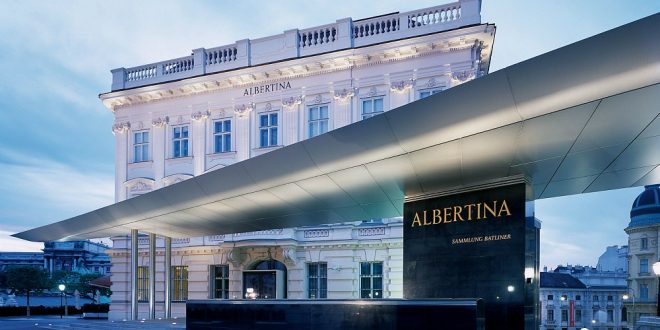 Every city has its boutique museums. In Wien, we have the Albertina Vienna, our little treasure chest of 19th and 20th century art, fine graphics, architectural sketches from Renaissance to Modernism, and Austrian vintage photography.

Different from most traditional museums modern confronts traditional at the Albertina’s exterior: a wing-shaped ‘trampolin’ by Austrian rebel architect Hans Hollein canopies part of the rococo palace’s terrace. Compared to the size of Belvedere Vienna and the Museum of Fine Art, the Albertina’s 20+ state rooms feel almost ‘private’. Even so, they house top international and Austrian art. 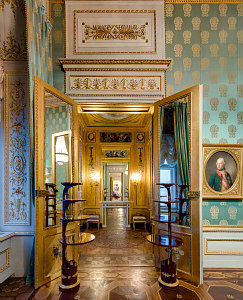 For the most part, the Albertina looks like any rococo palace: As you walk through the Rococo Room, the Spanish Apartment, the Reception Hall, and the Wedgwood Cabinet you can’t help remembering the Belvedere or some parts of Hofburg Palace. In the Hall of the Muses and the First Vestibule a dozen Greek statues from pristine white marble compete for attention with dazzling large chandeliers before baroque interiors take over.

Almost each rococo room dresses in a different silk damast: the Reception Room and Rococo Chamber wear mustard yellow, whereas the Small Spanish Apartment goes in pigeon blue and the study of Archduke Carl in emerald green. Apart from polished furniture and draped curtains the round tiled stoves in almost each room create a distinct mansion atmosphere.

Having paid perfect attention to detail themselves, the original builders and restorers make you watch every step: especially in the Royal Writing Room and the Gold Cabinet as well as in the Fireside Room and the Wedgwood Cabinet the marquetry floorings surprise with the most ravishing patterns. 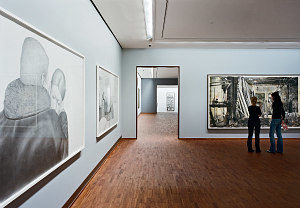 The first thing art lovers associate with the Albertina are its 19th and 20th century artworks. In fact, the Albertina Vienna’s collection of paintings tracks 200 years of art history. For example, Claude Monet’s famous Water Lily Pond lets soft light bathe in an iridescent green pond while tinging the water lilies in all colors of the rainbow. Or René Magritte’s Enchanted Spot, where two masked apples witness a tree trunk securing an axe while the other trunk’s open doors reveal a house and a bell. On a less confusing note, Gustav Klimt wraps two female heads in their own flowing manes and calls them Silver Fish. At the other end of the spectrum, Wassilij Kandinsky and his fellow artists occupy our minds with abstract forms from geometric to squiggly.

All in all, the Albertina makes a fantastic place to follow international art as it morphs from Impressionist blurry pastels to abstract art‘s fragmented objects and and dismembered individuals. 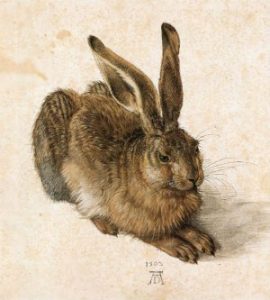 As soon as Austrian children start to draw, they learn about the Albertina’s signature graphic: The Hare by Albrecht Dürer. Long before the Albertina exhibited it the hare had become so popular that it had been copied various times from the 17th century. Today, the hare features on popular drawing pads for children. This picture shows this most famous animal drawing by Dürer. In the hare’s right eye, you can see the reflection of a cross window of Dürer’s workshop. In the Albertina’s free Augmented Reality app , that also covers a couple of other masterpieces, the hare awakens to life while the app reveals more about the story of its making.

As a matter of fact, a highlight often overlooked is the Albertina’s architectural collection: Specifically, you can use it to explore the Imperial Palace in cross section, for example. Alternatively, check out Art Nouvau genius Otto Wagner‘s sketch of the Imperial Pavilion. While not Viennese, I also love the sketches of Roman state buildings. What’s more, compare architectural models that Otto Wagner, Adolf Loos, Le Corbusier, Mies van der Rohe and Alvaro Aalto developed. In summary, the Albertina’s Architectural Collection is as small as it is exquisite.

How did Schonbrunn Palace‘s Gloriette look like in 1850? What were Derby horse races like in Vienna 1900? It’s exciting to see photographs, rather than just paintings, from the Habsburg Empire. Unlike paintings, they connect you in a more direct and authentic way. Beyond Imperial court photography you also tap into little documented happenings: for example, the demolition of the old Vienna city walls, photographs of the former Habsburg crownlands, and shots of the Austrian mountains, mountaineers and skiers.

Albertina Vienna. Hardly anyone visits a museum to have gourmet food, but Albertina may be an exception. In an adjacent wing of the museum, Demel owner Attila Dogudan offers fine Viennese and international cuisine. In contrast to the rococo glitz, the interiors of restaurant DO&CO exude mid century modern chic. What a great way to digest the rich art exhibited there with delicately prepared cuisine!

Other great Vienna museums: Vienna Museum, House of Music, Hapsburgs Museum of Furniture (Hofmobiliendepot); Museum of Applied Arts;
explore other Vienna Museums
get more ideas of What To Do In Vienna
back to Vienna Unwrapped homepage