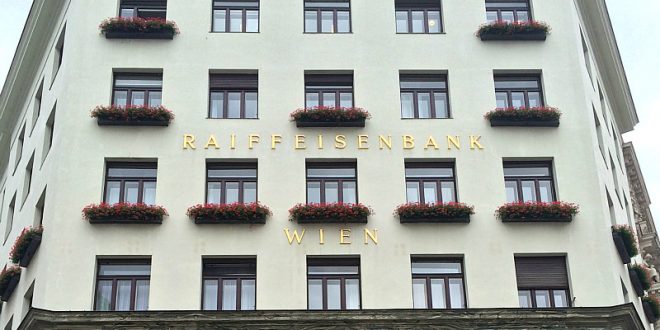 Where in Vienna can you explore modernism by architect and cultural critic Adolf Loos? Inspired by Loos’ polemic style guide Ornament and Crime I thought it was time to share a list of the 10 best Adolf Loos related sites to visit in Wien and surroundings.

Who Was Adolf Loos? 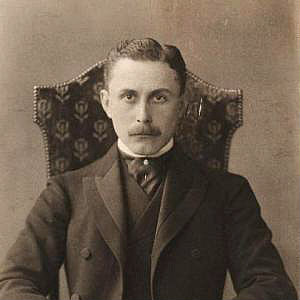 Adolf Loos Vienna. Born in today’s Czechia in 1870 Loos was a child of the Habsburg monarchy. His turbulent life started early: death of his father, one year of architectural studies at the University of Dresden, followed by doing odd jobs and some architectural drawing in the United States for three years. On the way home to Vienna, Adolf Loos spent some time in London. Actually, when discovering Modernism he would turn into a stern advocate of Anglo-Saxon lifestyle and design.

Back in Vienna, Loos eventually established himself as an architect and publicist. On a serious cultural mission, he advocated his vision of architecture and design based on the practicalities of modern life. Clear lines, practical and sometimes luxurious materials, and no ornaments created his rebellious signature style. (Think Baroque and Fin-de-Siecle Vienna‘s Art Nouveau and you will see the enormous clash.)

Changes in the traditional way of building are only permitted if they are an improvement. Otherwise stay with what is traditional, for truth, even if it be hundreds of years old has a stronger inner bond with us than the lie that walks by our side. (Adolf Loos)

Famously, Loos broke with the constraints of particular period designs and defined design quality through each user’s needs. As chief architect of the Viennese settlement bureau after World War I he turned into a master designer of small spaces. Loos had proved his talent already by designing the American bar (now mostly referred to as Loos Bar) in Vienna.

As disruptive and controversial as his professional views was his private life. Married three times Adolf Loos later was accused of child abuse, and convicted of ‘seduction to indecency’: Loos had invited young girls from poor families to act as nude models and posing in an immoral way. Actually, fellow Viennese artist Egon Schiele had earlier been involved in a similar case. Having been sickly for most of his life he suffered a stroke with 62 years, and died a year later, in 1933. 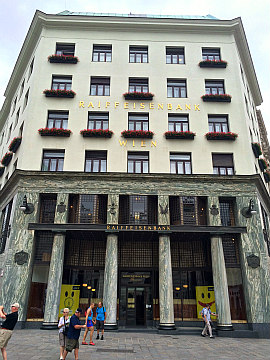 Adolf Loos’s most famous building sparked a massive row. As soon as the details of the bleak plaster façade for tailor shop Goldmann und Salatsch became clear in 1909, the Viennese authorities stopped the construction work. And Emperor Francis Joseph had his apartment’s windows shut to avoid the ‘unpleasant’ view. (More on the controversies and how Loos dealt with the Art Nouveau movement in this insightful ‘City of Many Pasts’ Tour.)

Although the authorities and most of the local architects opposed the ‘grain bin’ works finally resumed. Eventually, Loos added some flower boxes to the windows in the second floor to the ‘house without eyebrows’.

While the shop’s ground floor facade boasts beautifully grained marble, the interiors exude similar luxury thanks to polished timber, shiny mirrors and effectively structured skylights at the main staircase. You can enter the ground floor of what is now a bank, and explore some sketches and designs of the building. In the basement, Paolo Piva’s Design Zone Looshaus regularly stages international exhibitions and events about modern architecture. 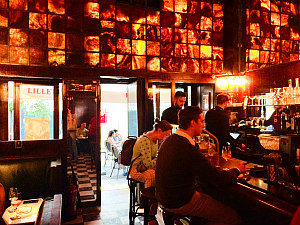 Adolf Loos Vienna. Is this bar really more than 100 years old? And just 290 sq ft large? Most dramatically, Vienna’s Loos American bar proves that his modernist designs defy both time and space. Efficient and effective, while comfortable and luxurious, the space outgrows itself with polished wood panels, space-extending mirrors and translucent onyx tiles.

Clean shapes provide Loos Bar with a strong touch of Modernism, as the rectangular benches, wall lights and checkered floors show. By the way, the baristas contribute their bit to luxurious classics with their excellent cocktails, martinis and manhattans. 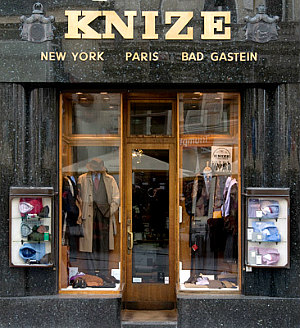 Adolf Loos Vienna. What fascinates me most with the Kniže men’s custom tailoring store is the total harmony between store design and product. While Kniže celebrates clean classics using luxurious materials Adolf Loos equally resigned trendy embellishments in favour of the effective use of brass, marble, glass, and polished wood. And guess what, both the world’s first modern men’s clothes brand and the original store design are alive and kicking in Vienna almost 100 years after their creation.

Tip: If an EUR 8,000 suit is not on your shopping list, try the classic Kniže Ten perfume. Alternatively, simply stick to admiring the store front. Given the central address on Graben you will likely pass it during your sightseeing. 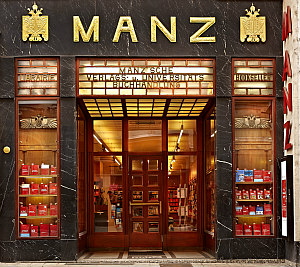 Adolf Loos Vienna. Long before the designer behind this bookshop appeared on my radar I loved to gaze at its storefront. Not because I was a fan of legal text books. Was it the shiny black marble pillars or the imposing set back entrance with its subtle lighting?

Like with Kniže, Loos gained valuable additional window space by setting back the entrance – a pioneering effect in modern shop design. Certainly, owners Markus and Richard Stein proved their bold taste for avantgarde when they commissioned Loos to design their bookstore. Especially since they went ahead shortly after the Loos Haus around the corner sent shock waves across Vienna. 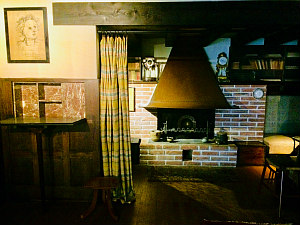 Adolf Loos Vienna. How did Adolf Loos himself live? Since he started out as an interior architect his ideas of living and dining put you at the center of his ground breaking modernist approach.

At Wien Museum’s Vienna Around 1900 exhibition you can sneak into Loos’ living room from 1903. Far from the total design of Wiener Werkstaette, Loos’ living room mixes and matches with a focus on comfort and practicality. It is almost makeshift. No two chairs are the same. The bare-bricks fireplace with checkered curtain and the rural-style seating area are unusual for a city center apartment. On top, the ceilings have different heights.

My tip: To get behind Loos’ ruthless critic of the interior design status quo read Ornament and Crime‘s chapter ‘Learn to Live!’  His advice to fellow citizens in short: Don’t let artists get into the way of how you want to live. Be your own designer. 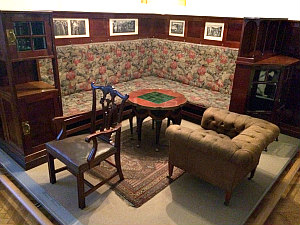 Adolf Loos Vienna. Further to Wien Museum, the Museum of Applied Arts / Contemporary Art (MAK) includes some fabulous Loos design amidst its Vienna 1900 collection. My favourite is his corner seating ensemble for the study of Marie and Gustav Turnowsky. (Marie was the sister of Loo’s good friend and satirist Karl Kraus.)

Like with his many store designs, Loos used precious materials such as mahogany, silk, leather, and brass. But his seating corner doesn’t pull through a specific design line. Rather, it looks like he incorporated his clients’ individual wishes, from the floral tapestry to the chesterfield chair. 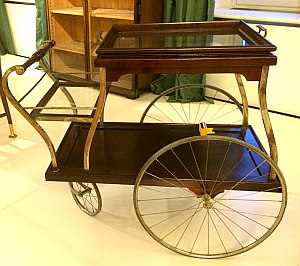 Adolf Loos Vienna. At the Imperial Furniture Collection (Hofmobiliendepot)  you can compare more of Loos’s design with his contemporaries Wagner, Hoffmann and others in the Vienna Modernism collection. If you like Viennese coffeehouses, watch out for the different designs of coffeehouse chairs, including one by Adolf Loos.

The collection includes another dining room boasting polished wood and subtle leather upholstery, but this time it looks more harmonious. What caught my eye there was this serving trolley (photo) in polished nutwood. This Modernism masterpiece has two serving levels and you can conveniently remove the upper tray. On top, the huge wheels roll smoothly across even the thickest carpet. 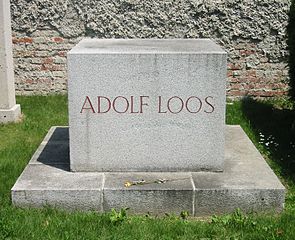 If you visit the Central Cemetery in Vienna, where many composers and celebrities are buried, do pass by Adolf Loos’ grave of honour. Strikingly, his self-designed tomb stone reflects all the design principles he had fought for during most of his life: A simple cuboid bearing nothing more than the deceased’s name in well readable letters.

By the way, just a few meters from Loos, you can find his life-long friend and writer Peter Altenberg’s grave. 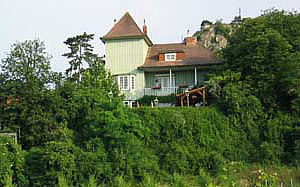 Adolf Loos Vienna. In the Southern Vienna Woods, an almost Mediterranean-style country house overlooks the vineyards. Original called Landhaus Spanner, the cottage’s straight blocks stick out from the rolling landscape of the Vienna Woods. Its lime green stripey façade is not exactly avantgarde, but aligns with Loos’ credo: ‘Don’t fear of being told off as unfashionable.’ As for the interiors, quite a bit has changed from Loos’ original design.

If you visit the charming vintner village of Gumpoldskirchen, consider walking up to the winery and have a glass of local red or white (open only on selected dates). 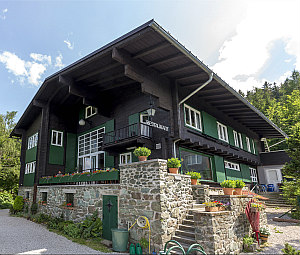 Adolf Loos Vienna. With Landhaus Khuner, now simply called Looshaus, Loos managed to redefine romantic Alpine architecture for the 20th century. Half Swiss cottage, half Vienna Woods villa, the country house is located 70 km south of Vienna close to Payerbach. Long after the construction boom in the Viennese Alps in the second half of the 19th century Landhaus Khuner was finished in 1930.

Respecting traditional construction methods, the wooden cottage with solid stone foundation amazes through its generous living hall spreading over two levels and the panoramic windows. Deliberately, Loos had adapted the traditional Alpine farmhouse into a rural retreat for the modern urbanist.

Today, the Viennese’s once so popular Semmering area is well loved again by hikers, culture fans and skiers. A little off the beaten track, Looshaus’ hotel and excellent restaurant makes a great start.

How To Tour All These Sites?

Since Loos’s masterpieces are scattered, and to get behind Viennese Modernism and Loos’ relationship with local Art Nouveau, consider hiring a specialist private (art) historian guide. Depending on what you’d like to see you will either just walk, take public transport or use private transfer with a driver: Get in touch. 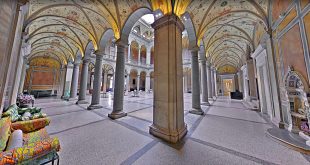 Museum of Applied Arts Vienna. Quite Italian in appearance and British in spirit, the Museum …